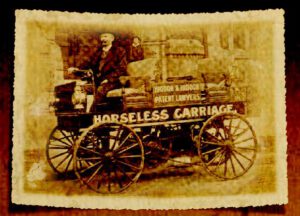 Perception and interpretation of cloud computing with the existing experiences, beliefs and values that affect the way an individual perceives reality, admittedly, will not be easy to accept emerging new business-driven model with the new paradigm offers revolutionary processes.

Last year I read a white paper, titled “The Economics of The Cloud”, stating an old paradigm which replaced a new paradigm lead to large scale changes in the car industry. According to article, when cars emerged in the early 20th century, they were initially called “horseless carriages“. The first cars were the same as the carriages pulled by horses. And that was, in fact, what people called them: horseless-carriages, as seen in the photo to the left. Since the prevailing paradigm referred to the horse and carriage together widely held for centuries in a society, there was difficulty in understanding for such revolutionary science coming with the new paradigm. Therefore, the engineers, in fact, could not imagine designing such a car more safe and comfortable way of carrying at that time because of the dominant paradigm.

Early pioneers of that era in the car industry failed contemplating the instigation of a future revolution in the new paradigm, such as limitations to hire a chauffeur (special driver) for each car. Much as it seems to have a bite at the cherry -of course contrast them with the current wisdom- meaning the situation is of tremendous investments, only if they were able to see the opportunities within the restriction of climate change on profitability respect to under present circumstances arising from car industry.

In comparable manner, put through a doubting reception from the majority, the opportunities of the cloud computing has a profound impact on the way in which we do business may not able to being perceived the unlocking hidden profits at the bottom of the iceberg throughout the formation of adequate perception of new paradigm.

The new paradigm of Cloud Computing matured over time with the new technological processes and platforms will enable to change the business-oriented models of organizations.

Hereafter no need to deliver IT services On-Premises meet to demands since the comprehension of business is shifting with a new paradigm comes with a more holistic and qualitative approach. That is one way of looking at the business driven model says that computing services will be provided, on demand, how and when they are needed, quickly, efficiently, and very cost effective. Therefore, the business will drop to worry about IT capabilities and concentrate on their own requirements to make them more cost effective, but now in a scalable way of using the Internet to access the services provided by cloud computing.

At this point, we could say the term “win-win” situation for both global vendors of cloud technology offerings and also consumers in which cooperation leads to all participants benefiting. However, there will be a slight benefit for the environment hidden, in “Green profits” of the companies switching over to the cloud computing solutions. To put it in terms of Green IT, here are some quotes from the breaking ‘Green IT’ news;

“The Carbon Disclosure Project released a report that found cloud computing can reduce energy consumption while improving efficiency within a company.”

“A study by Accenture, Microsoft and WSP Environment and Energy estimated that a company with about 100 people can reduce its energy output and consumption by about 90 percent by using cloud applications.”

Its solid being seen the heavy resistance of organizations, affected by regulating against the new technologies, while moving from one paradigm to the revolutionary new science will provide new methods and techniques for business model. So, this ultimate challenge leads to restriction of the organization’s vision, and a precision of the security of confidential intellectual property match that can be achieved in no other way. New and re-defined methods and technologies result in greater perception and understand of the reflection of the cognitive style of the future.

It is not rare at all to find people who believe they are safe by hosting their data on-premises instead of cloud environment. As for me, they are like an ostrich with his head buried in the sand as everything is going well them by, feeling safe and secure falsely believing they know all they need to know.

It may be logical to raise the following question at this point: shouldn’t we take all possible security precautions early and seriously before the failures occur for the data that are sensitive for us? From my point of view, in fact, there is no question as to which is more accurate. This is a continuously improving process that is optimized itself.

The engineering might have started to struggle of man against nature, and this ongoing. The fundamental reason that is becoming more reliable of the aircraft that we use safely and is being the most preferred transportation is the crashed planes in the past and the people who died in it. As a result of the sensibilities as being sorrowful stories, the engineering renews steadily itself by taking advantage of nature and the necessary security is being improved continually for the benefit of humanity, and that will be continued.

Therefore, there will be no absolute endpoint on the matter of security. The only thing we need is to rely on technology at a certain point by taking the necessary precautions against the possible risks. The approach of the using technology after having matured enough, as a matter of fact this is our chronic problem in my sight, is more likely to miss the mark of technology at every turn. The only we can contribute the improvement of new technology by using it so that we don’t miss the opportunities by adapting to the new paradigm rapidly as well.

Turgut is working for Fujitsu Technology Solutions as a Team Leader, System. He has been studying the disaster recovery and business continuity planning that leverages and benefits from virtualization and cloud-based technology in public sector. He has already prepared a business continuity architecture and strategy considering a private cloud model as part of the infrastructure to take advantage of the benefits of Microsoft virtualization and the System Center suite with the scale and flexibility to transform the way they deliver services to the business.