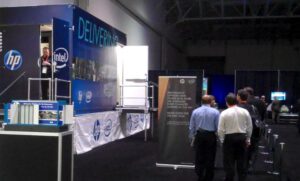 Today, HP brought its cloud solutions roadshow to Toronto, bringing some heavy hitters up from the US to explain cloud computing to an interested but very reserved crowd of 700 IT managers, CIOs, and software gurus.

The event, held at the Direct Energy Centre, can be described as a tasteful hybrid of trade show and conference, with an army of HP staffers outfitted in black with orange lanyards, primed and prepared to explain the intricacies of cloud management with nicely-produced videos, sample slices  of hardware, and coolest of all, a full-sized mock-up of their HP Performance Optimized Data (POD) Centre, a completely self-contained data house essentially built inside a cargo container, and deployable pretty much anywhere, including, as the reps stated proudly many times, into combat zones in Afghanistan.

The POD basically contains dozens of racks of computing power and can be delivered  anywhere by truck. It  can be hooked up to a client’s existing data system, and therefore  best symbolizes the dynamic nature of “the cloud,” a term that has taken the business world by storm (which is not always a welcome thing. As HP exec  Patrick Harr described it, the cloud can often be seen as the world’s largest Ginsu knife – overhyped and romising all things to all people.)

The reason the POD works so well as a symbol of the cloud is that it is versatile, external, scalable, energy efficient  and highly secure. It is also managed and run by someone else. And these are precisely the issues that scare many decision makers, who see “cloud” on the horizon, and who know that it will be on top of them eventually, but who really do not want to take on the risks of shifting their data to an unknown space and out of their control.

That is why the first half of the day was given over to three keynotes, Intel’s  Eric Doyle and HP’s Dave Frederickson and Patrick Harr. They all talked in great detail about the confidence issue: first, that HP has been looking after people’s business (technologically-speaking) since 1932, and then how business is shifting to an open source service model, in which mashable apps and dynamic, fluid service are the necessities from this point on. Harr points out that CIO’s are no longer in full control. As “business” outpaces “IT” in making decisions regarding adopting and adapting to the cloud the role of the CIO itself is changing to become a builder and broker of services.

In a shift from the “build it and they will come” mentality of large-scale enterprise technology  providers of past epochs, HP points out that the cloud era is one of responding  to feedback and adjusting accordingly. There is more than a hint of “free-market economy” in this approach. A shadow of Adam Smith’s invisible hand, when describing “federated technologies” as an opportunity to move away from proprietary infrastructures  (such as existing mainframe and storage systems) that may actually “stifle innovation.”

The biggest concern of most customers who are considering cloud solutions is security – ranging from the safety of secured data to the location of the storage sites themselves. Compliance, liability and the US Patriot Act loom large in the minds of those who still have trouble letting go of the notion that the safest place for a company’s data is with themselves.

HP is working hard to demonstrate and prove, through its raft of hybrid cloud, public cloud, private cloud and virtual private cloud solutions, the best place for a customer’s data is in the scalable data ecosystem of the cloud, which grows and adapts to an organization’s needs while remaining ever-present and reliable.

And although most of the analogies and terminologies used to describe this technology are soft (clouds, and ecosystems, for example), it was a shrewd move for HP to park a great big truck trailer in the middle of the  convention floor, to give their customers something real to touch and explore. (When no-one from the HP army was watching, I actually kicked its actual tires.

Here’s an interesting parallel, one somewhat removed from the busy world of cloud computing. In the world of “people,” social psychologists who specialize in generational issues are starting to refer to the most recent generation of kids coming-of-age as the Purell generation, since they are likely to be aware of every hand sanitizer bottle or station in their homes, schools, and favourite stores.

This thought came to me as I observed a breakout session on cloud security at the HP Master The Cloud conference, in which the presenter discussed the principle of practicing good IT hygiene. Good IT hygiene. That’s a great term to help get the concept of cloud security across to executives and others who are not comfortable with standard IT terms.

While businesses and organizations wrestle with their fears of moving to the cloud, the security analysts at HP reminded the audience that last year 1773 Exabytes of data were transferred. An Exabyte is one quintillion bytes, or 1,000,000,000 gigabytes, or 1,000,000 terabytes. With all of that data zooming around, it is worrisome to learn that in too many cases, the number one threat to data security is a company’s own internal employees, representing 60-70% of security threats, of which only half were accidental.

This is one of the biggest problems a company faces, but one that is not noticed as easily as the larger concepts such as moving to the cloud. When our presenter asked how many in his audience of 60 routinely encrypted their hard drives, less than half raised their hand.

This points to a contentious issue in cloud security. Simply integrating a new technology stream is not a full guarantee of safety and security when the people who use it do not understand or adhere to security protocols themselves. This is why HP is working hard at their cloud systems conference and beyond, to discuss the human factor: they want to help customers get their minds around the concepts of safety and prudence in action.

With demands on IT budgets growing disproportionately to the actual available money, HP emphasizes the importance of educating executives and companies as to best practices – IT hygiene – and this further s HP’s mission of becoming a key outsourcing relationship partner.

To best describe the benefits of cloud solutions, HP says, it must be described to executives like insurance – fire insurance, for example, since insurance is one of those intangibles that cannot be seen, but which has achieved legitimacy in the budget cycle. Furthermore, they stress the importance of benchmarking and follow-up – showing executives what has worked, and what it has saved them in time, money and security.

They have come up with a consulting/customer care relationship that stresses building a community of purpose. I repeat that word: purpose: Conscious actions by people to achieve a goal. This helps build physical usage patterns that are a far cry from the rote actions that become the open door for security threats.

Assess, transform, manage, optimize. This is how the HP people move in and walk alongside their customers, ensuring that all technological change (such as data migration to the cloud), is matched with procedures and habits that ensure safety starts at its most vulnerable point – the end users themselves.

The HP “Mastering The Cloud” Event drew to a close around 4:30, after one last blast of hot dogs, pretzels and other salty refreshments.  As someone who has attended, bought space in , and spoken at trade shows, and as an independent blogger, I would rate this one to be quite successful in terms of affirming HP’s role as an authority and credible partner in cloud management and cloud security. A key ingredient in this assessment is what I call the 4:00 “bedraggle factor,” in which most people who have spent all day at a trade show emerge into the light looking bleary, dehydrated, over-informed and under-stimulated.  I did not see this at this cloud computing event. Instead I saw people talking, networking and exploring, up until the last minute.

Host/emcee Adam Growe was charming in a completely Canadian-non-offensive way. His only sideswipe was his video depiction of  Toronto as a city that calls in the army when the snow gets too deep, but, hey, the mayor of Toronto at the time was a businessman, and business people do what they have to do to get things done, and that’s what HP was promoting – getting things done in a free-market open environment, instead of stifling creativity with closed-door  proprietary systems. Besides, Mr. Growe  plays a cab driver on TV, and no one complains louder in this city when the streets get clogged than the cabbies. Maybe some method acting is in order. However, he was gracious enough to admit he really didn’t understand the technologies and terms he was incorporating into his act, and good for him – he represented every company owner in this country, who must face an onslaught of indecipherable terms, all aimed at delivering a case of the willies to the C-Suite about the safety and sanctity of their own data.

This is heavy stuff. It comes on the historical heels of mainframe/dumb terminal computing in the 1970’s and 80’s, networked computing in the 1990’s, and IP/Internet computing of the 2000’s, all claiming to be the salvation to a company’s woes.  Now, once again there is a new solution, in which mashable apps and Hybrid clouds promise a future of secure data and cost savings.

In Canada, this might be a tough sell. Not that there’s anything wrong with it (cloud computing, that is,) but because Canadian business owners are cautious – they often ask “how much might we lose” rather than “how much can we make”?  They want to see the proof. Our hosts from Onx.com with whom I and other journos met over sandwiches at lunch, said it best: “How do you convince Canadians? The market will convince them. “That’s fair, I guess, especially in a shaky economy.

They also did well to deploy a legion of enthusiastic techies, who were happy to explain the transformational process:

They stressed the nature of feedback from customers throughout the process, maintaining a “federated automated and client aware” ecosystem.

In short HP did a great job in displaying themselves as a multidimensional solutions provider, not just providing the hardware, but the thinkware – the attitude and strategy – that must accompany it. HP has been doing this since the 1930’s and their alliances with other industry giants such as Microsoft point towards a particular degree of might and versatility.

The roadshow next veers west, to Calgary and Vancouver. Adam Growe is hoping to pass as a cowboy in his Tilley hat, which I know from bitter experience, won’t work. He would do best to find a bolo tie and fast. But HP will make a lot of new friends especially when they show off just what their hybrid cloud delivery systems and modular transportable PODs are doing for the mining and oil & gas industry.