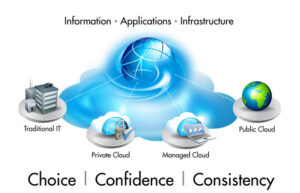 The title of this post comes from one of the more interesting comments made during the Twitter chat on 12 April focusing on the interactions between the public and private clouds, and how converged clouds may be the solution to several associated problems (the conversations are viewable on Twitter under the #convcloud hashtag).

To put it into perspective, Godot refers to the eponymous character in Samuel Becket’s play who never did arrive. This lack of standards and consequent interoperability problems, coupled with the distrust CIOs have for public clouds, make HP’s converged cloud offering especially relevant.

Several cloud computing stakeholders, including yours truly, participated in the chat which revolved around the following four questions, presented along with some of the key takeaways:

1. Are the public cloud and the private cloud mutually exclusive? What is a converged cloud?

All agreed that they are not mutually exclusive – one can exist in tandem with the other. However, each has its own merits and demerits. I provided an analogy that proved to be very popular among the participants – “Private cloud is like your summer home where u r the sole user, public cloud is a hotel with multiple customers.”

Converged cloud provides compatibility between them so as to bring together the best of both worlds. I commented that RightScale has mentioned that 87% of their clients use multiple cloud types and multiple cloud providers, to which Christian Verstraete ‏ (@christianve), Chief Technologist for Cloud Solutions at HP responded “That really demonstrates the need for a converged cloud…..That’s why we plan working of single platform. Keep it open to ease integration of external clouds.”

2. What differentiates a converged cloud from other “clouds” and cloud services in the industry?

Someone mentioned, “Applications written to take advantage of public and private cloud can migrate between the two.” Converged clouds make this easier. As HP says, it’s “Complete solution. Single architecture.” Personally speaking, I consider the converged cloud to be a hybrid cloud on steroids. According to Christian Verstraete, “Converged Cloud integrates infrastructure control, management & security control and information control across the clouds.”

3. What apps lend themselves to a public cloud, a private cloud and a converged cloud?

There was general agreement that “Core apps are best in private cloud, context apps may be in public cloud.” In other words, “apps and data over which companies desire absolute control should be on the private cloud” while those “that may experience huge demand surges are better on the public cloud.” Apps that require both lend themselves to a converged cloud.

4. Do private and public interact? If so, how?

I cited the example of Zynga to demonstrate a case of such interaction between private and public cloud.

In conclusion, it may be said that what HP is offering with its converged cloud will likely enhance user experience while making optimum use of available resources.

For more information, you may also visit: http://www.enterprisecioforum.com