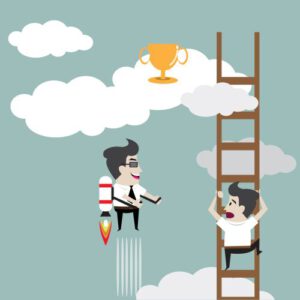 In the cloud conversation, Platform as a Service (PaaS) and Infrastructure as a Service (IaaS) appear much less than the famed Software as a Service (SaaS). This is not surprising when you consider that a world already populated with built platforms and infrastructure has but to operate on them. However, offering Platforms and Infrastructure through the cloud has been a boon to the software development field, especially with the recently growing push toward increased collaboration between developers and admins, commonly referred to as Development Operations (DevOps).

Though somewhat easy to confuse the two, it may be best to view PaaS as a subset of IaaS with fewer responsibilities in terms of provision of infrastructure. Specifically, choosing PaaS over IaaS moves the responsibility of managing the database, runtime, and middleware from an organization to the vendor of the service. PaaS and, to a lesser degree, IaaS are a direct route via the cloud to facilitating the work of software developers, though IaaS may be more desirable in cases where an organization has a suitable existing infrastructure and prefers more control over those elements.

Over recent years, the rise of devops has highlighted a push toward agile development, which is a model that favors multiple updates to software over a shorter period of time as opposed to the traditional waterfall method. Cloud computing and virtualization enhance this approach by speeding processes and increasing flexibility. In a quickly evolving business environment, agility is a most sought after quality.

Demand for agility requires a streamlined approach that lowers costs in terms of manpower and time. As such, many large companies have taken to the automation in the cloud by employing application deployment software that takes care of application delivery and updates. In order to understand the path application development (AD) is on and how this gives rise to PaaS and IaaS, it is best to look at the market as a whole.

According to Gartner’s principle research analyst, Asheesh Raina, “Application modernization and increasing agility will continue to be a solid driver for AD spending, apart from other emerging dynamics of cloud, mobility and social computing.” Cloud and Mobile technologies are also cited as largely driving the direction of AD.

The prolific use of smart phones and tablets has led to widespread adoption of Bring Your Own Device (BYOD) to increase efficiency in the Workplace. As such, much of the AD market is expected to focus on mobile devices. Gartner predicted that applications developed for mobile devices would outnumber those developed for PC at a 4:1 ratio by 2015.

The vast majority of application development is expected to happen in the cloud in coming years as well, largely thanks to BYOD and the cloud. Even development that takes place on premise is largely aimed at being cloud-ready. It is undeniable that AD will be central to the growth of cloud computing.

The Bureau of Labor Statistics reports for projected employment growth through 2020 show a growth in software development related jobs that is approximately twice the national average. According to Forrester’s VP and Principal Analyst John Rymer, “PaaS holds the key to the full use of cloud computing.” This is because applications are the driving force of our technological advancement into cloud computing and PaaS offers, “easy development, fast deployment, focus on your business problem, reach, elasticity, and self-service,” Rymer says.

Still, PaaS has only recently gained significant recognition as a cloud computing category. It is built on IaaS, so it stands to reason that it has come into play only as we delve deeper into the cloud. Businesses have to take a pragmatic approach to emerging technologies and IaaS is often a logical step in migrating an existing application stack into the cloud. Questions and concerns have to be addressed before becoming deeply invested. However, just as with cloud computing in general, businesses become increasingly comfortable utilizing PaaS as they attempt to take advantage of its proposed benefits. Given the growth of industries that stand to reap the benefits of IaaS and PaaS, early projections of the growth of these services may be modest in terms of investment in cloud technology.

Arthur Nichols is a Systems Analyst with a passion for writing. His interest in computers began when Deep Blue beat Garry Kasparov in a regulation chess tournament. When Arthur isn’t drawing up diagrams and flow charts, he writes for BMC, leading supplier of cloud software solutions.