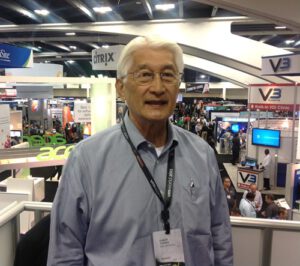 Seated high above the sleek yet carnival-like atmosphere of the VMWorld Exhibition Hall, Hubert Yoshida, Chief Technology Officer of Hitachi, watches over his suppliers, his customers and his competitors, all occupying neighboring parts of expansive show floor.

Hitachi is one of those names everyone knows. It has been around since 1910 and is widely diversified. Its name conjures up images of very physical objects, excavators, televisions and computer components, and its physicality remains front and center even as it moves into a virtual future.

Much of the conversation at VMWorld has been about the virtual and the scalable, with VMWare’s NSX platform taking center stage as the obvious go-to tool for network virtualization, and Yoshida is proud of this. He points out that VMWare is owned by EMC, essentially a competitor to Hitachi, but that by taking a proactive lead in terms of openness and availability, they have helped create a world where advances in scalability and reliability can truly happen for all suppliers and their customers.

In old days, he recalls, people tried to consolidate applications. Servers and applications had to hook into the existing operating system. But “what VMWare did was brilliant.” By creating a space where operating systems and applications can be stacked up, rackspaces started shrinking. Cost savings were being realized while their information and usage opportunities grew. “The space problem,” he says, “is going away.”

But virtualization doesn’t happen just by itself, he cautions. Intelligence applies to hardware as much as it does to the applications that now float above it. In other words, “there must be integration between hardware and software – hardware does not become just a commodity. It must integrate in order to set policy.” He specifically points out the versatility of the VMWare vCenter interface as an example of this efficient integration effort. “We do not have any ego,” he says. “There is a philosophy that exists among the key players of the industry just to ‘make it available.’”

Yoshida advises CEOs and decision-makers to observe and participate in the inevitable movement of vital information from the traditional data centre to the private cloud. He says this should be done in steps: First, virtualization, which leads to consolidation, which in turn gets rid of underused resources. This means virtualization of storage, network, each component in turn. The next step, he says, is automation. The virtualized world is one that relies on dynamic and automatic maintenance and oversight. It would be a misunderstanding, he says, to believe that software defined storage equals a commodity. There needs to be more intelligence built into the system.

“You cannot take a 1960’s Mini Cooper and make it perform like a Porsche,” Yoshida said. “Hardware must have the intelligence to meet the service requirements of the software.”

Recalling techniques of the past, where, for example, new storage devices had to be plugged in and formatted by the admin, redundancies created, unit numbers logged, LUN ownership assigned and volumes mapped, all of this can and must now be automated, based upon policies defined by the software.

“It’s one thing,” he adds, to build a cloud, but quite another thing to be able to scale it. The must exist an ability to refresh the hardware so as to not have to bring systems down. And this is what virtualization should be able to do: Virtualization should be able to bring in a new box, virtualize the new box, bring data across, and then drop the old box without anything going down. You cannot take things down when you’re in the online business,”he states. “It’s what is called non-disruptive migration.”

Returning to the idea of openness, Yoshida points out that Hitachi has an open approach to virtualization, just like VMWare. “For example,” he says, “most people redefine LUNS into virtual LUNS. We don’t do that. We don’t have to do anything unnatural to help make you virtual. We do not want to make anyone change. Openness is the key, as people move into private cloud, hybrid cloud and progressive automation of the procedures. This, he says, will allow security and failsafe redundancy to be better integrated into the whole. It must start within the box,” he says, “safety cannot be layered on the top as an afterthought.”