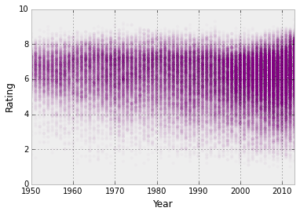 How Big Data Is Changing The Film Industry

The film industry is huge, generating in excess of $520 billion revenue in the USA in 2013.

Imagine if this behemoth of the entertainment world could be further refined by taking account of consumers’ preferences, viewing habits and cultural interests?

Big data makes this refinement possible. As consumers publish information and provide a constant stream of feedback on Twitter, Facebook, Google Plus and personal blogs, studios now have almost limitless information about what genres prosper, which actors are favoured, how films are marketed, and which adverts should appear where.

An interesting example is that of the ‘Internet Movie Database’ (IMDb). Boasting a database over more than 2.5 million films and 50 million users, the site enables anybody to contribute new material, edit existing entries, and most importantly, rate any film on a scale of 1 to 10. This data can then be extrapolated into charts, tables and graphs about broad categories (favoured genres, directors, actors and storylines) to the extremely specific (most overrated films in Ottawa with a PG certificate).

When combined with other datasets such as aggregate Google search queries, studios can predict how well their films will perform ahead of time – gaining insight into whether an idea is likely to fly to the top of the box office charts or crash to the bottom of the movie scrapheap. Big data used in this way could ultimately put an end to the much fabled ‘movie flop’, preventing recent box-office disasters such as ‘The Lone Ranger’.

Films and marketing campaigns can tailor-made for individual geographic locations and their performance can be monitored. There is research that suggests there is a direct correlation between the amount of ‘likes’ a film receives on Facebook, and its likelihood of selling out at a cinema showing. This allows studios to work harder on marketing drives and word-of-mouth campaigns for films that have the least receptive reactions.

It is now possible for early reactions in Asia to determine the strategies that will be implemented in America just hours later, with releases, adverts, and word of mouth controlled in different countries at the studios discretion.

In a Tribeca Talks Industry panel discussion, the example of ‘2016: Obama’s America’ was used to illustrate the point, with the film using a steady release based on localised political trends to achieve a much higher level of success than would have been possible with a standard nationwide or limited release.

Not all of the impacts of big data are necessarily positive. With such readily available information about preferences and passions of cinema-goers, there is a danger that the quality and diversification of films starts to suffer. Directors and studios are far less likely to risk money and prestige on an untested and unproven formula, instead erring on the side of caution and producing tried and tested content.

As with all things, the data also requires skilled analysis to prevent misleading interpretations. To again use the example of IMDb, several commentators believe the data to be flawed for many reasons. For example, the website maintains its own ‘Top 250’ list, yet only non-documentary theatrical releases running at least forty-five minutes with over 25,000 ratings are considered, and submitted ratings are filtered and sorted in various ways in order to produce a weighted mean that is displayed for each film.

Ultimately, studios who don’t hire people who can manage data sets and then use strong programming and math skills to extract findings that tell a story may just find themselves making the next Waterworld!