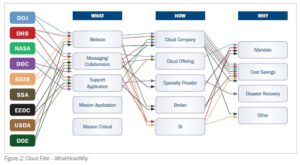 In December 2010, the U.S. Government’s Chief Information Officer Vivek Kundra issued a 25 Point Implementation Plan to Reform Federal Information Technology Management, designed to streamline and modernize the Government’s use of IT, primarily by shifting three “must-move” services to the cloud within 18 months. Now, more than three years later, a comprehensive report has been released by the Government IT Analysis organization MeriTalk which reviews the progress being made by the agencies who were able to comply with the mandate.

The report entitled Cloud First Consumer Guide, provides valuable insight from 15 federal agency IT heads, each of whom has had to analyze various cloud deployment approaches, work with a variety of cloud service providers, and assess the pros, cons, costs and benefits of large-scale migration to the cloud, on behalf of the American taxpayer.

The report contains some highly valuable insights, both positive and negative, but with an overall conclusion from all agency heads that moving to the cloud makes sense.

Some of the problems highlighted in the report focus on “soured relationships” with vendors as well as ever-present cash flow and budgeting challenges, which were exacerbated by sequestration and Government agency shutdowns, both threatened and real.

Skepticism as to actual cost savings was a recurrent theme among many agencies at the start of the project, but many clear examples of tangible improvements were later recorded, whether the migration focused solely on email management, as was the case with the Bureau of Alcohol, Tobacco, Firearms and Explosives (ATF), or more complex Infrastructure-as-a-Service (IaaS) migration, as performed by the Recovery Accountability and Transparency Board (RATB). Agency heads were able to identify benefits in both cost savings and cost avoidance.

The agencies discovered that cloud migration was not merely a cost-saving opportunity, but that there was significant opportunity for innovation, both in terms of deployment as well as the economics of maintenance. As MeriTalk puts it, “cloud delivered cost savings plus a new level of agility in meeting mission demands,” specifically in areas such as reliability, accountability, mission focus and flexibility. Interesting developments in this area included NASA, who opted for cloud-based disaster recovery options to “geographically expand its resilience without paying for independent infrastructure,” and the Department of Homeland Security (DHS), which saw a benefit in using a “pay-as-you-go model” in place of a more traditional investment-return scheme.

One of the greatest learning opportunities from the Cloud First report comes from the agencies’ approach to implementation and vendor selection. As the report states, “most Federal decision makers aren’t looking for complex – they are looking for meaningfully simple.” From this MeriTalk was able to categorize Cloud First offerings into five groups: Cloud Company, Cloud Offering, Cloud Broker, Specialty Vendors, and Systems Integrators.

Ultimately, the report delivers some sound takeaways for companies of any size considering a similar migration to the cloud, as delivered by those agencies who have already taken the plunge. Firstly, you must define your objectives beyond simple compliance with a mandate. Secondly, do the math – plan and budget thoroughly. Third, perform a reality check on your business case and your project plan. Fourth, take a more hands-on approach to managing suppliers and procurers. And fifth, expect challenges along the way. 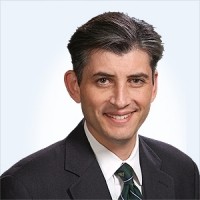 Steve O’Keeffe, founder of MeriTalk, hails the results of the plan to date as a great step forward in both the sharing of collective wisdom and the realization of significant cost savings for the many branches of the US Government. “The Government has 777 supply chains,” he says, “and cloud provides an opportunity to break up some of the silos and their inefficiencies.” He points to the fact that $80 billion is spent annually on federal IT infrastructure, with 70% of this spent just to maintain legacy systems. A move to SaaS offers an opportunity to streamline processes significantly.

Similarly, the prospect of increased transparency in the knowledge-sharing sphere is starting to become more appealing to the country’s various agencies. “None of us is as smart as all of us,” O’Keeffe states, “and mutual access to information, suppliers and best practices allows the various agencies to make better use of every tax dollar.”

Ultimately, as O’Keeffe points out, the US Government represents the largest customer in the world for almost every product and service imaginable. The report concludes that migration to the cloud is a worthwhile endeavor for Government organizations. The challenges encountered during the migration are matched and exceeded by the gains achieved, and ultimately, the trail blazed by the agencies who participated in this undertaking may actually help streamline the process for organizations that choose to follow, in both public and private sectors around the world.