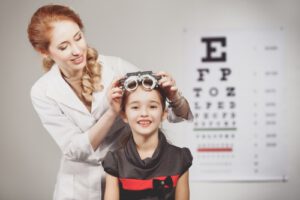 A revolutionary new technology that could improve the vision of thousands of children around the world has been receiving increased coverage in recent weeks. We’ve already seen cloud computing can benefit the healthcare industry from a provider’s side, but the latest vision-screening technology is one of many that has real potential to help patients.

The global healthcare statistics are nothing for the developed countries to be proud of. One billion people lack access to any form of professional healthcare, and an estimated 7.5 million children die from preventable causes. Although the developer of the technology (VisionQuest2020) won’t able to greatly affect the bigger picture, they do hope to help some of the world’s two million blind children.

In 1997 it was estimated that 45% of blind children were blind from avoidable causes. Today, even in the developed countries, as many as 1 in 4 school children have undetected and untreated vision disorders, while 48 percent of children under twelve have not had a professional eye exam. VisionQuest believe it to be a looming problem, saying “Not only is [the children’s] personal well-being and health being affected, but it is estimated that annual societal costs are more than $50 billion from the cost of treatment and lost productivity”.

Embracing the challenge, VisionQuest is now working with schools across the country to implement affordable school-based vision screenings. To undertake a screening, children wear special glasses whilst interacting with a video game that is designed to test the quality of their sight. The video game streams different tests from the company’s cloud-based database, depending on their age and preferences.

The cloud also plays an important role in the software’s appeal to the medical staff and opticians who are using it. Each child’s screening history is retained in an online database, enabling rescreening without record duplication as well as reports that can be reprinted at any time. It means if a child moves between schools or leaves the area they will maintain an easily-accessible record, while the same records can be opened from both a school and an off-site optician when required.

Screenings can even be performed when there is no internet connection. Once a connection is re-established, the results are consolidated into a password protected, HIPAA-compliant, cloud based data repository with restricted access.

The technology has been a great success in its trial period and has been used to screen more than 200,000 children for problems as diverse as cataracts, retina damage and colour blindness. The test’s main benefit is that the cloud removes the requirement for a professional to be present; the software’s real-time decisions and use of logic protocol to validate the results means a parent or other volunteer can perform the procedure.

With medical industry backing, the technology look certain to become more prevalent. Already its supporters are claiming that the big data gathered from widespread adoption of the system would be able to help guide public health policy decisions and provide information for continued public and private support and funding.

What role can the cloud play in the gathering of big data across all industries to help improve Government spending? Is a computer game an adequate replacement for a well-trained and high-experience professional? Let us know in the comments below.