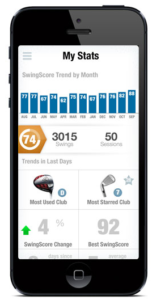 Although mainstream news sites carry a constant flow of articles about smart-watches, fitness bands and health monitors, anyway from these conventional devices there is a thriving industry producing unique and fascinating wearable gadgets. Here are some of the more interesting devices available on the market today:

Golfing is famous for being a pastime of retirees and millionaires, and while the majority of the former group may not have too much interests in honing their swing to a professional standard, the latter group certainly might.

Luckily for such people, Zepp have developed and released the ‘GolfSense’. The glove measures information such as swing speed, plane, tempo, and hip angle before sending the data to a smartphone app. Once the data has been loaded into the app, users can review golf stats, create detailed reports as well as create a 3D animation of their swing along with tips and advice on how to improve.

While devices to monitor your health are nothing new, monitoring your health via a temporary tattoo is certainly a unique proposition.

ElectroZyme have developed a printed electrochemical biosensor which gives the wearer feedback about biomarkers such as pH and salt levels. The ‘tattoo’ is applied directly on to the skin before a special armband is placed over the top that can read the measurements.

The company already have a history of producing outlandish wearable tech – Co-Founders Joshua Windmiller and Jared Tangey started to develop chemical sensing ‘smart underwear’ as long ago as 2010.

Although computers, tablets, smartphones and handheld games consoles can all tell you when a Wi-Fi signal is available in a public place, Brando Workshop obviously felt that still omitted some users and consequently introduced the ‘Wi-Fi Detection Hat’.

The hat, which can detect 802.11 b/g/n Wi-Fi signals, uses coloured LEDs to show wearers information about show network strength and availability – though it is not clear how users are expected to see this information while the device is actually being worn.

The hat comes in three colours and retails for around $15.

If you are the type of person who craves social validation via ‘Likes’, ‘+1s’ and ‘retweets’, then the ‘Like-a-Hug’ could be the perfect device for you.

Developed by MIT student Melissa Kit Chow, the Like-a-Hug claims it allows users to “feel the warmth, encouragement, support, or love that [they] feel when [they] receive hugs”. The device is actually a vest worn underneath a person’s normal clothes which inflates to mimic the feeling of a hug when a user receives a social media endorsement. Users can even hug the original person back in return, they just need to squeeze and deflate their own vest.

For people of a certain disposition the summer means one thing – music festivals. Following the sequence, music festivals often mean mud, and mud means wellies. Thankfully, GotWind and UK-based mobile operator Orange have teamed up to put all those wellie-clad feet to good use.

Connectivity-conscious wellie-wearers can now purchase ‘thermoelectric wellies’ – devices which give users a way to charge their devices on-the-go by converting heat from a person’s feet into an electrical current. Sadly, despite the developer’s noble intentions, wearers will have to do a lot of walking to fully charge their devices – twelve hours of wear will provide a typical smartphone with just one hour of power.

Do you know about any bizarre uses of wearable technology? Let us know in the comments below.