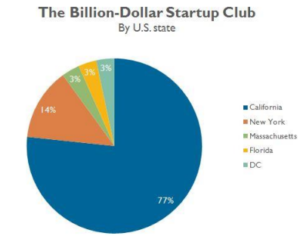 For those who are regularly involved with SMEs, venture capital, and company valuations, it is common knowledge that start-ups that exit for more than $1 billion dollars are extremely rare – often termed ‘unicorn’ companies.

Despite their rarity, it should come as no surprise that venture capitalists are very keen to identify them at the earliest possible stage. The problem is that it is much easier said than done. Traditionally, locating, predicting and investing in unicorn companies has required a lot of time and effort; a good investment could reap huge rewards, whereas a poor investment could cause bankruptcy, yet a good VC that could maximise returns consistently was hard to find.

The onset of big data and cloud computing is changing all that – a fact that was highlighted in a recent CB Insights report titled “Analysing Venture Capital Performance”. The report argues that venture capital data could help to identify these companies and in the process highlights yet another valuable, real-world application of the growing big data industry.

Naturally, some VCs are stronger at the process than others – but how could this be quantified when several VCs would invest late in the growth of a start-up in order to benefit from the halo effect that participation could offer?

The important trends were analysed by identifying the investors in forty five venture capital backed American tech companies that exited with a valuation of at least $1 billion (either via an initial purchase offering or an acquisition) between 2004 and 2013. It was found that 104 venture capitalists invested in the companies prior to their exit, with sixty five percent of them investing in only a single company, but remarkably three VCs had invested in eight start-up unicorns.

How had they been so efficient at identifying them? Andy Dunn from clothing firm Bonobos was brutal in his assessment, saying “Dear dumb VCs, how many companies are in your portfolio that have reached $1 billion in enterprise value? If the answer isn’t two, you are not good yet”. It implies that the best VCs already have an innate ability to spot the start-ups with the highest potential, and the rest need some help. At least that’s how it appeared.

A closer analysis of all the big data available revealed that the trick is investing early in the Series A or B rounds of funding – and not focussing too heavily on the company itself. Investing early means investments can be made at a lower price and thus enjoy maximised returns when the time comes to sell. The distinction is important; of the sixty five percent of VCs that had a $1 billion exit, a mere thirty eight percent made their investments in the Series A or B round of funding, yet of the three VCs that had eight or more unicorns on the books, investments were made in Series A or B rounds a staggering fifty percent of the time.

What all this proves is that the elusive ‘unicorn’ VCs are increasing their early stage investment focus, not decreasing it. Leading the way is Charles River Ventures who invested as seeds or in Series A ninety percent of the time, while Sequoia Capital – one of the VCs with eight unicorns – had seen a seventeen percent increase in early stage investments between 2010 and 2013.

So – what does this all mean for the big data industry? It serves to highlight how big data is not just useful for businesses and enterprises to monitor consumers and investigate new products, but also can be used in to predict, identify and choose the best options in the cutthroat world of start-up investments. If big data can be successfully applied to these types of metrics, it can undoubtedly be extrapolated to include stock markets, investment funds and company shares. Going forward, this is yet another example of how big data is starting to permeate every aspect of how we perceive and analyse the world. It’s growth appears unstoppable.