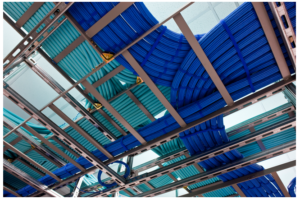 A couple of months ago we looked at data centres which have unusual locations. Varying from the cellars of a cathedral in Helsinki to a disused World War II fort, the lengths that companies would go to in order to save money and improve efficiency were remarkable.

The article proved popular, so to follow it up we now take a look at data centres with unusual power sources. Whether the power sources are used to save money, improve green credentials, or change the perception of the business, all these locations have something unique about them.

eBay’s data centre in Utah is huge for a reason. The company has a staggering 300+ million items for sale at any moment and completes $2,000 worth of transactions every second.

Microsoft – Blowing in the Wind

They are trying to claw back some good will among both the tech community and wider population by using wind energy to power data centre in Chicago. They have agreed to purchase 175 megawatts of wind power in Illinois for the next twenty years – an investment which marks their largest ever outlay on green energy supplies and will provide them with a level of energy that is equivalent to powering 70,000 homes.

“Microsoft is focused on transforming the energy supply chain for cloud services from the power plant to the chip. Commitments like Chicago ensure a cleaner grid to supply energy to our data centers,” said Microsoft’s director of energy strategy, Brian Janous, at the time.

Apple are well are that human beings produce a lot of waste – as a species we created 2.6 trillion pounds of trash in 2012 alone. It didn’t take them long to realise that all the garbage could be put to good use.

The cells at its North Carolina data centre now run on biogas that is captured from landfills. It’s a renewable energy of sorts – we produce more waste, we make more gas. Apple hope that using biogas will reduce greenhouse gas emissions and smog-forming pollutants whilst also diversifying the fuel used to generate electricity across the North American continent.

Do you know about any unusually powered data centres?