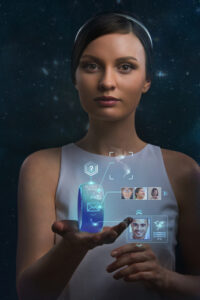 Wearable Tech In The Workplace

Wearable Tech In The Workplace

Wearable tech is already profoundly altering the way we interact with our personal lives, but as the industry continues to grow relentlessly it will inevitably permeate into the workplace. This shift has the potential to greatly change the way employees are managed and monitored – for better or for worse.

Already companies such as Kronos and Hitachi are developing technology that can be integrated with wearables in the workplace. Kronos’ watches and wristbands include tracking and communication capabilities, while Hitachi’s ‘Business Microscope’ looks like an employee ID badge but includes sensors that track who is speak to whom, where those conversations take place and how frequently they occur. It means managers can monitor the who are the most active participants in meetings, or who spends more time away from their desk than they should.

The natural conclusion of wearable tech in the Workplace is employers who have the ability to track their employee’s movements, send them alerts, remind them about responsibilities, and discuss ideas. It could happen at any time of the day and regardless of where the employee is location-wise. Such technology has business leaders drooling at the prospect of increased productivity, while have workers fretting about privacy concerns and being hassled during breaks and vacations.

Clearly, companies need to exercise extreme caution when implementing wearable tracking systems. The current law in the United States is that employees have to verify that they agree to allow employers track their location, and this is unlikely to change. Stephen Burnett – a management school professor – says that while more data and more analytics is a good thing, it has to be a joint effort between employer and employee.

“It can’t be a top down thing” he said. “It can’t be ‘I’m going to measure you, spy on you, and control you’, it has to be a joint venture between the company and the employees”. Crucially, he believes the most important feature is that workers must benefit from any system as much as the business does. “Companies should be smart enough to still give employees discretion on how they do their work. Employees who know their job will resent being turned into a robot” he added.

Kronos seem to be sensitive to Burnett’s points. Their software will also track employees’ skills, meaning it can aid with targeted training and will also allow companies to easily send questions, comments and feedback to a worker who is well-suited for a specific task – empowering the employee and giving them a sense of value. It is hoped that this technology can ultimately be fused with other wearable tech – specifically health-related wearable tech – and can tell managers which people in a manual job are most in need of a rest and advise them on the best person to replace them with, in terms of both skill-set and physical condition.

Ultimately, wearable tech in the workplace that is implemented in the right way could lead to a happier, more productive and more motivated workforce. Get it wrong and it could backfire, with employees leaving or sabotaging the system.