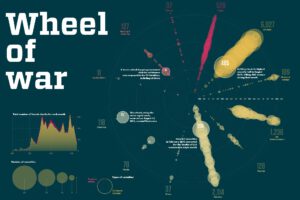 A popular article on Huffington Post about homelessness stats sheds light on the fact that providing homeless people with a place of residence would save taxpayers money. It’s easy to understand why the article went viral so quickly. That is, data have proven it’s financially expedient to do what’s morally right (which happens how often, exactly?).

However, there’s one thing the article fails to mention. Data, and in particular, Big Data is already being exploited elsewhere in the US to predict and prevent homelessness.

Of the many initiatives for using Big Data and tech related to it — to help disabled people, for example, — one organization in particular stands out. SumAll.org, a non-profit that aspires to “leverage the power of data for social innovation”, provides astonishing, data-driven inquiries into social phenomena all across the globe. SumAll collaborated with the city of New York to build models that can determine households that will be at risk of being evicted 3-4 months in advance. That’s real power for social workers who can reach out to those in trouble much more easily.

And they don’t stop there. Of particular interest is the data-mining project that maps the death toll in the Syrian war. Where newsflashes focus on isolated cases, not providing the full picture of the human suffering involved in the atrocities of war, meaningful statistics can illuminate the nature of the conflict. SumAll collaborated with Wired to map the casualties of the Syrian war, visualizing a “wheel of war” that reveals the conflict’s progress into disarrayed killings of women and children.

And there’s a lot to say about the uses of Big Data for social services in general. Problems such as dropping out from school can be predicted and prevented to a degree with Big Data insights. Neighborhoods can be better served by mapping the ones in need of more social workers. Grisly problems like human trafficking can be better understood and tracked, perhaps prevented too. Social problems are complex, and the potential of Big Data isn’t nearly as used for solving them as it should be.

In the end, though, those are social workers, foundations and governments, not data that will reach out to those identified as potentially being in trouble. And it’s the obligation of those on the top of the chain of command to provide people in direct contact with the sufferers with actionable information. We’d all benefit from that.

These are just a few of the social phenomena that Big Data can help with. What other initiatives can you name, are involved with, or are simply excited about? Let us know below.