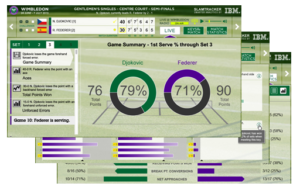 Big Data Sports: How Data Is Changing The Future Of Sports

Big Data has reached into the innermost areas of our lives. The way we manage cities, shape communities and go about building personal relationships is changing thanks to Big Data. Sports is one other area that’s increasingly witnessing changes in big data acquisition, analytics and, subsequently, performance and revenue optimization through data-driven insights.

The benefits of Big Data in sports apply roughly to two groups: the fans and the teams, though advertisers and individual athletes stand to gain as well.

The fans can be understood much better with Big Data. Social media tracking establishes trends and patterns that alert teams to changing perceptions. Predictive marketing can be done on a much wider scale, smartly bringing together past purchases present attractive offers. Team apps help greatly to that aim. Bought a Mercedes hat? Perhaps you’d like a Lewis Hamilton t-shirt at a discount.

Accessible statistics make the game more fun as well. The IBM Slam Tracker was introduced at the 2014 French Open at Roland Garros. It showcased not only point-by-point winning odds of the contestants, but also displayed the players’ real-time popularity on social media. Such number-crunching cannot influence the end result, but it adds a whole new layer to games that, unlike poker, couldn’t boast real-time insights better than that the commentators’ educated guesses.

The stadium is an area where innovations can be used to great extent. iBeacon, an Apple app catered to retailers and customers, is used in stadiums not only to push offers for seat upgrades and discounts at food stalls, but to inform the viewer about the lines at the bathrooms, better direct viewer flow and improve the overall “on-site experience”.

Some of Germany’s success in the World Cup can be attributed to Big Data. The team made use of Match Insights, a tool developed by the German SAP, that allowed the coaches of national teams “to crawl through complex video and make it simple for them to know what they need to win”. Match Insights utilizes data capture from on-field cameras and helps pinpoint the areas, or plays in which players need improvement, boosting the efficiency of practice sessions.

Capturing data is key. It’s done in the NBA and NFL as well. Athletes train with sensors that monitor their heart rates, reaction times and distance covered. The data can be used to prevent injury in-game; crunched later on, this data can provide performance insights as well.

But you don’t have to be a million-dollar team to have such statistics at your fingertips. Golfing apps are available to Android and iOS users alike; they gather statistics that show areas of their game that need improvement. Players can surmise which clubs work best, how their plays have varied over time, and their best plays.

With all this, won’t the “spirit” of competitive sports die away if numbers become all that’s important? However effective, Big Data doesn’t take away from the fact that what you see are real players with real sweat and real blood. It’s getting more interesting, not necessarily more predictable.