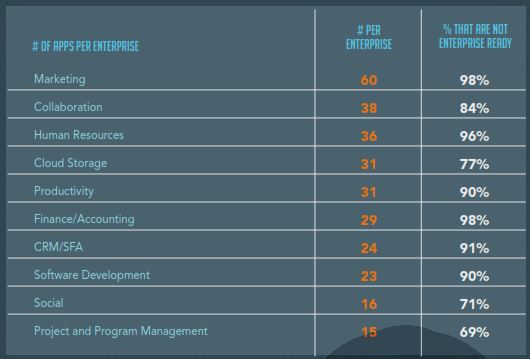 Over the last two days we’ve looked at  whether or not Shadow IT is a opportunity or a threat, and the security risks that unapproved apps pose to businesses and organisations. To conclude the mini-series, today we look at a new report that’s been released by Netskope. The ‘Netskope Cloud Report’ typically compiles the most interesting trends on cloud app adoption and usage based on aggregated, anonymised data from the Netskope Active Platform.

The key theme in the Q3 report for 2014 is how mobile devices have been using the cloud. They note that more than half of all ‘send’ or ‘approve’ activities occur on mobile, and a shockingly high number of activity-based policy violations also occur on the platform. The most frequent offenders aren’t social, but largely “prosumer” apps – demonstrating that IT departments are still finding it difficult to move employees on to a single, approved app for a single, specific purpose.

In total, businesses are using on average a mammoth 579 cloud apps, of which a worryingly high 88.7 percent are not enterprise ready – failing to meet standards in either security, auditability, or business continuity. To reinforce the belief that Shadow IT is spiralling out of control, Netskope cite one business which used more than 3,000 apps. As we discussed on Monday, this is a huge problem for IT departments, especially given more than one-third of all policy violations are currently occurring via mobile apps.

Policy violations can take many forms – ranging from downloading personally-identifiable information from an HR app to a mobile device, to alerting when users share documents in cloud storage apps with someone outside of the company. With 44 percent of all download activities occurring on mobile devices, and with 40 percent of all sharing happening via mobile, it’s quickly apparent why IT departments struggle to track, update and manage the Shadow IT within an organisation.

The top ten apps that violate IT policy were also highlighted in the report. The high usage of these apps by employees should provide yet another serious concern for IT departments.