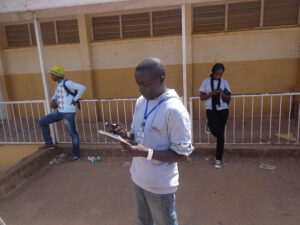 To Have and Have Not: Big Data Initiatives In Developing Countries

The poor of the developing countries are becoming increasingly connected, to the point where they too are part of the Big Data revolution that’s happening across the globe. It didn’t come with laptops, though, as some supposed it would. Whereas it costs a fortune to connect broadband to a remote village, a mobile tower is in many cases already there. Big Data has made its way into the developing countries in the form of cheap mobile phones, cellular internet and creative, open-source problem solving.

Slums, even though about 33% of the world’s city-dwellers inhabited them in 2012, are seldom if ever considered a real part of the city. They are perceived as filthy, disease-infested places with no absolutely no structure whatsoever, often not even mapped so authorities can act as if they’re non-existent. In Kenya, an OpenStreetMap-related initiative allowed youngsters from Kibera, the largest slum in the capital city of Nairobi, to finally map this part of the city with GPS sensors.

The authorities and the inhabitants themselves are now better-informed about the conditions in the slum, and the mapping project has turned Kibera into a better, safer community. Fascinatingly, the Map Kibera project was inspiration for similar mapping projects during the Haiti earthquake of 2010. We should note, however, that it was with the help of westerners who trained the Kiberians that the initiative was started at all.

Although mobile phone users leave far fewer traces than individuals who surf the web constantly, the patterns they exhibit when traveling can be used to do good. Caroline Buckee, a renowned humanitarian, sought patterns in cell phone data that is left behind by people switching from one tower to another and came up with a surprising revelation: it’s possible to find malaria hot-spots through cell-phone data by tracking user migration between towers.

Furthermore, Big Data is used to transform the relief programs themselves. Social analytics, product tracking and analysis of contract awards can shed light on both the effect of relief programs and the relationships between contracted companies. Donators can get a better idea of how effective their dollars are, and the organizations themselves can sniff out suspicious contract patterns or interest conflicts.

It is, on the whole, evident that even though the so-called digital divide is shrinking across the world, it’s not enough just to give everyone a laptop, or a mobile phone for that matter. Training and education have to be ‘dropped’ with the container as well. Bottom-top initiatives will have a better chance of success, but this leaves the communities vulnerable, too. As poor regions become better at self-managing, authorities that previously viewed slums as potential threats can turn their backs on these communities entirely.