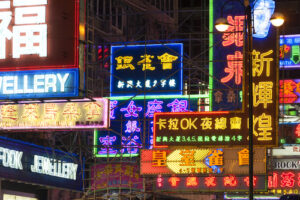 It’s been almost impossible to avoid news about the ongoing protests in Hong Kong in recent weeks. The population is demanding greater democracy and autonomy from China – something that was supposedly safeguarded for fifty years after the UK handed control of the principality to the Far Eastern giant in 1997.

What has been less-well covered is the way the demonstrations have been organised and conducted. Protesters’ ‘app of choice’ has been FireChat – a service advertised in the Google Play store as “a new way to chat off-the-grid”. The reason the service has been favoured by people on the streets of Hong Kong is that it uses mesh networking – a technology that gives protesters a way to communicate with risking either bringing down their cell phone networks or using a network that their Government could monitor, control, or shut down.

Mesh networking is an ad-hoc network infrastructure that can be set up by anyone. It wirelessly connects computers and devices to each other without the need to pass through a centralised organisation (such as an ISP or phone company). A mesh network has the ability to reconfigure itself according to the availability and proximity of bandwidth, storage, number of users etc – thus making it highly resistant to both disasters and outside interference. In fact, the only way to shut down a mesh network is to shut down every individual node in the network, a virtually impossible task.

This recognition of mesh networking as a useful service has the potential to bring great benefits to the ongoing growth of the internet of things. It’s something that the developers of Firechat – OpenGarden – have been keen to exploit. At the CTIA trade show in Las Vegas last month, they announced the launch of ‘The Open Garden Network’ – a software system specifically designed to help internet of things devices connect to each another via a mesh network. It will allow lots gadgets in close proximity to network together without the need to rely on, or consume, the bandwidth of other networks.

Companies are already taking advantage. Phone Halo – makers of TrackR (a service for finding valuable items such as keys, wallets, and bags by using GPS) is one such example. They cannot use cellular or Wi-Fi radios due to the amount of space and power required, so they were using a phone-based TrackR app. Now they can take advantage of The Open Garden Network’s app for online and offline communication, meaning the amount of TrackR tags in operation should swell to considerably more than the existing 250,000.