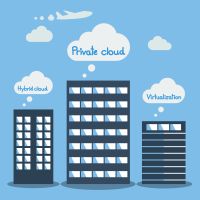 Public or Private Cloud: Costs The Main Factor After All?

Are Cloud Costs The Main Factor?

Even though private and public cloud is usually a choice between flexibility/security and loss of control versus keeping it, there is increasing evidence that, for all the benefits of the public cloud, many companies would actually save by establishing a private cloud. A report on the subject states that companies spending more than $7,644 monthly at AWS should consider moving to the private cloud. However, let’s not take that figure at face value but examine it a bit further instead.

Is cost a fair measure for the cloud?

You may ask: is the focus on costs not misreading the whole enterprise? Using the cloud is, after all, a trade-off between having resources at your disposal and being able to increase workload or remove unused instances as needed. Furthermore, there are issues like latency, compliance to standards, as well the logistics–because you can’t realistically predict the workload early in the project–that the cloud addresses with ease but that take a lot of deliberation to solve with a private solution. And they can’t be put in an equation because they’re unique to each business.

On the other hand, there’s a growing trend that more and more startups follow. They start with a public cloud and afterwards move to a hybrid with an emphasis on private cloud. Companies like HubSpot and Moz started off with a public cloud (AWS) and later on, when the workloads were more or less stable, moved to an OpenStack hybrid cloud with the public cloud, presumably reserved for either testing or peak periods of activity. Moz report to have saved $3.4m by moving to a private solution.

This is quite likely accounted for by that most applications have a rather stable regular workload that only rarely experiences spikes. The predictable workload, if large enough to make it financially beneficial, should be moved to private cloud, but the public cloud would be used for activity spikes.

Then again, many caveats exist for the private cloud as well. There’s the reliability problem, which can be dealt with by using different data centers; then there’s the capital investment required to set up a private cloud, and this for some companies is simply insurmountable. As can be seen, these two are also going to be different for each business.

To conclude, even though a private cloud solution may turn out to be cheaper, the move to it, as well as away from it, should be made after careful deliberation. Just as there are no two identical businesses, there are no identical cloud solutions, so let’s just say that the figure cited at the beginning is, at best, a very rough estimate.