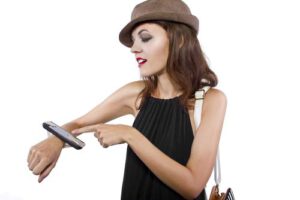 Wearable Tech: What’s More Important – the Device or the Data?

The wearable tech marketplace is a dynamic, ever-changing arena. No sooner has one gadget launched than a newer, better, more full-featured device has taken its place. Similarly, the rise of the ‘invisibles’ threatens to totally undermine the dawn of wearable tech, promising to add a discreet, always-on appliance that can monitor us around the clock.

According to the founder of health firm LifeQ, however, this doesn’t really matter. Riaan Conradie, a computational biologist, was speaking at the CES 2015 in Las Vegas when he said “Mobile health is following a very similar evolution to weather forecasting, going from simply going outside, through barometers to sophisticated computational forecasting”.

He says the future of wearable technology in fitness and health isn’t about the fitness bands and health monitors – it’s about what can be done with the data they collect. In fact, he claims we now have so much data that it’s difficult to know what to do with it and how to process it. “You started with going to the doctor for a snapshot of your health, but it was very hard to know how hard to run before causing injury. Now we’re overwhelmed by the number of devices, with metrics everywhere, spitting out data you don’t know what to do with.”

It’s apparent that this endless stream of raw data is a) not particularly useful to consumers, and b) not particularly appealing to consumers. There is already evidence which suggests people are becoming resistant to all the data streams and metrics – they want more valuable, actionable insights. As Conradie says, “The future of wearables is not wearables per se. Just like in weather forecasting, the traditional meteorological recording equipment is still needed, but it’s more about analysing and using that data”.

An example of a company that is starting to realise this is Jawbone. Their new Up3 band uses heart rate to track sleep among other metrics, but then collates that data and uses it to create useful coaching tips to improve sleep and overall health. “Checking a device that tells you you’ve had five hours of poor sleep is not useful,” said Conradie. “But identifying why I’m not sleeping well after X, Y, Z – after I’ve eaten too much, drank something, not exercised enough – then it becomes useful to change habits and do something about the poor sleep”.

Other companies are also starting to catch-on. Wearable giants Fitbit, along with Misfit and Intel’s Basis are doing similar things, while Google Fit, Microsoft Health and Apple Health services promise to provide a universal store for the personal health data collected by devices for a deeper, more meaningful analysis.

Despite the growth of analytical tools, Conradie echoes the thoughts of Samsung’s chief Executive BK Yoon’s from his CES speech yesterday when he said collaboration is key to kick-starting the IoT revolution. He believes that deep analysis of data sets is not something a single company can achieve – instead it will need collaboration between industries, technology, medicine and science to provide meaningful insights.