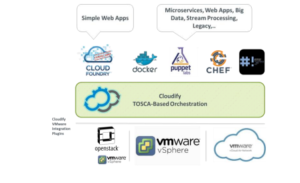 VMware and the Benefit for OpenStack Users

While hybrid cloud has been a mainstay discussion in the cloud world for quite some time now (note this post of mine on hybrid cloud from 2011, when CloudStack was still Cloud.com), the reality is that setting up hybrid cloud has proven a fairly complex process. Therefore we’ve seen only a few real implementations of true hybrid cloud in the wild.

However, recent developments with the VMware landscape, have changed this reality, finally making the hybrid cloud story simple and possible.

While most public clouds started as an independent public cloud service and only later started to add private cloud connectivity VMware’s vCloud Air was designed in pretty much the exact opposite approach; primarily as a native extension of VMware private cloud – which has been a market leader in the cloud and virtualization arena for many years. This evolution in the VMware offering afforded the many users of VMware platforms the same tools to manage local VMware environments to manage public cloud resources, as well.

This change has made the hybrid cloud story significantly simpler and more attainable. This means users no longer need to worry about the connectivity between the two sides of the data center, and at the same time get the cost benefit of using resources on demand, and on a pay-per-use basis.

This development with VMware is a major game changer, and to me, also represents an important milestone for OpenStack users as well – which, it is no secret, is near and dear to my heart. In an ideal world, we could rely on OpenStack, or any open source cloud, alone for our cloud needs. However, the reality is that many enterprises require a multi-cloud strategy, as they have previous investments in other infrastructure many times based on VMware, including: vSphere, vCloud and others.

The reason, this was interesting to me, is in my capacity as CTO for Cloudify, this ability to make hybrid cloud so realistically possible, fit well with our pure-play orchestration vision, and made the integration with the two platforms – which .was previously an involved undertaking much more promising.

Putting it all together 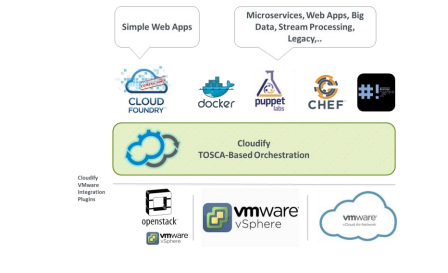 VMware public cloud users have been needing a simple way to deploy and manage their applications on the cloud using devops tools similar to Amazon Cloud Formation. As the landscape is still being shaped, and there’s no clear winner yet, it is very important for these users to have tools that will allow them to keep their options open.

This is where TOSCA comes into play. TOSCA (Topology and Orchestration Specification for Cloud Applications) has been gaining a lot of attention lately as it has filled a gap of providing a standard templating language that doesn’t tie users to a particular platform.

On top of that TOSCA orchestration, also aims to go beyond the installation part of the application and covers all the aspects of the application lifecycle through the addition of workflows and policies that can be used to handle continuous deployment, self-healing and auto-scaling processes.

This is a use case we have encountered quite frequently with Cloudify users, who many times come from the Enterprise and Telco markets. These users are already heavily invested in VMware, while at the same time, are actively looking for a more agile and cost effective way to run their data center. The ability to bring capacity on demand seamlessly into private cloud makes the entire private/hybrid cloud story now thinkable.

With the combination of public cloud, TOSCA, an orchestrator and open source cloud (in this case I’m going to use the example of vCloud Air, TOSCA, Cloudify and OpenStack to demonstrate this), you can achieve the cost benefit of using on demand resources in private data centers in a way that doesn’t tie you to a specific platform. While at the same time delivering a more complete application lifecycle and management solution that allows full automation of deployment and DevOps processes.

For those who aren’t familiar, in short VMware provides three kind of platforms today, where vCenter/VSphere environments serve many enterprise data centers today, while VMWare Integrated OpenStack provides API compatibility with OpenStack for its vSphere/vCenter environment.

A native implementation of TOSCA blueprints as a templating language across cloud environments – in this case vCloud Air, vSphere and OpenStack, provides the element of consistent management of applications across all three environments, which is where Cloudify comes in. This also enables the building of mixed resources across environments using the same blueprint.

The benefit for OpenStack users

It’s no surprise that many OpenStack users are one and the same as those heavy users of VMware – namely enterprises and Telcos. This integration makes the ability to mix and match existing VMware environments together with OpenStack and public cloud, providing greater flexibility to decide which application and workload fits which environment best, while using common and consistent management to manage applications across these environments. While on top of this, these types of organizations are very much standard-driven, which is why the importance and adoption of a standard like TOSCA is becoming a driving criterion in the choice of orchestration.

Nati Shalom, founder and CTO of Cloudify, is a thought leader in cloud, big data, open source and more. Nati was previously the Founder and CTO of GigaSpaces.  He has received multiple recognitions from publications such as The CIO Magazine and YCombinator and is one of the leaders of OpenStack and DevOps Israel groups. Nati is also a frequent presenter at industry conferences.