Becoming a Victim of a Criminal Cyber Crime Gang is Increasing 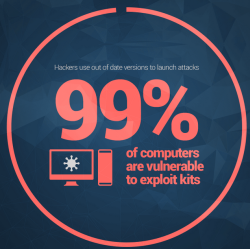 It’s easy to get lulled into a false sense of security when browsing the web. As more and more devices join the internet of things, the risk of becoming a victim of a criminal cyber gang is increasing – we have more unsecured access points and offer would-be thieves more routes into our home networks.

It is with this in mind that a new infographic has been released by Heimdal Security as part of a wider investigative piece into protecting yourself against online threats.

We take a look at some of the key findings:

Heimdal claim that 99 percent of computers are vulnerable to attacks because they use out of date versions of either Oracle Java, Adobe Reader, or Adobe Flash that can be used by hackers to launch their assaults. These figures reinforce the point we made in our exclusive newsletter last week, when we featured a report by Menlo Security that found that one in five sites are running software with known vulnerabilities that can be exploited by criminals.

The most expensive computer virus of all time was 2004’s MyDoom. According to Heimdal, it caused $38.5 billion USD of damage to those affected before being discovered in late January. At its peak, it was suspected that the virus infected 1 in every 41 email messages – 25 percent of the worldwide email traffic at that time. It initially spread through widely used file-sharing program Kazaa and installed itself into the Windows system folder as Taskmon.exe and Shimgapi.dll.

Away from individual viruses, it is reported that a massive 68 percent of funds stolen in cyber-attacks were ultimately unrecoverable. That’s helped bump up the estimated annual cost of global cyber-crime to more than $100 billion USD, and it’s starting to pose a very real threat to the economy.

You’d think it is your government’s job to protect and support its citizens. That philosophy doesn’t seem to have translated very well into the online world, however. Heimdal claim that “government Malware accelerates the evolution of criminal malware” as they obsess themselves with ‘back door entry’. Hackers then ‘reverse engineer’ governments’ tactics and technical approaches to make their own malware more robust and advanced.

Social media has now become a hacker’s paradise. Accounts hold a wealth of data and information that in some cases can be enough for a hacker to completely steal your life. It is claimed that 600,000 Facebook accounts are now hacked every single day – that’s 219 million per year. One in ten users of social media now say they’ve been a victim of a cyber-attack, and that number is growing as additional services and third party providers come online.

What do you think of the report and the infographic? Is it truly worrying or more industry scaremongering? Perhaps you have been a victim of cyber-crime? We’d love to hear from you, let us know your comments in the space below.