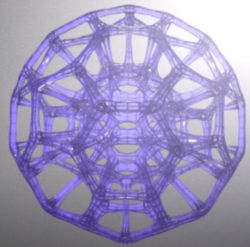 3D Printing Technology is exciting business and straight out of the pages of the Terminator 2 script, a Silicon Valley start-up called Carbon 3D Inc. have developed a technology that “manipulates light and oxygen” to form solid objects from liquid.

Time Reports: “The technology, called CLIP (Continuous Liquid Interface Production), is a departure from the layer-by-layer method of 3D printing, resulting in a process that is 25 to 100 times faster. The process works by beaming light through an oxygen-permeable window into a liquid resin. Controlled by software, images of the 3D model are projected into the resin pool, where the UV light begins the hardening process and the Oxygen slows it down. The technology could be use for personalized medical stents or even made-to-order athletic apparel.”

Many people are still skeptical of 3D printing, seeing the flaws in the technology more that the endless possibilities it could bring. One of the biggest arguments from naysayers is that 3D printing will render intellectual property nonexistent, which could stifle competition and innovation in the industry. 3D Print.com offers a great rebutal to this argument.

From 3D Print.com: “Do you remember when Netflix launched? It was certain to kill off the TV industry at the time. What ended up happening though? The exact opposite. Netflix is one of the fastest growing businesses on the planet, reimagining how we all watch TV. As technology changes, markets adapt. Intellectual property is an important fabric of a capitalist society. The sharing of patented 3D models for printing is sure to present many challenges in the years to come, but new business models always emerge.”

As you can see in the video, the printer appears to slowly pull a solid object out of liquid. At this time, it’s unclear whether larger objects of different sizes, colors and uses can be grown from liquid using 3D printers. It can’t grow things out of metal at this time, but that could very well change. This technology is absolutely awe-inspiring. I won’t begin to pretend to know how it works, but if you have an idea, please let us know in the comment section.

3D Printing and Education – Infographic
It could be a mere matter of time before we will have the ability grown our own objects from liquid. The possibilities are endlessly mind-boggling  Only a few short years ago, stuff like this only happened in Star Trek.