How Big Data Is Improving Entertainment For Sports Fans 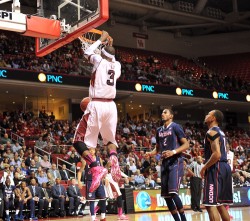 No longer confined to the tech world, big data is everywhere these days. It is shaping the way governments are run, how we buy everything from groceries to video games and how we interact in a global social media landscape. It was only a matter of time before big data made a big appearance in sports. Data insights and analytics for professional and college sports is increasing fan interest and driving revenue previously unavailable. The use of big data in sports is exploding in a big way.

According to AT&T Innovation Blog:

“Over the last four NCAA® Men’s Final Four® tournaments (2012-2015), total data usage on AT&T’s in-stadium mobile network has increased more than 300 percent both overall and during peak hours. That’s a soaring leap that wouldn’t be possible without our people and the tools we use to cover these kinds of events”

Just like in any emerging technology these days, big data pairs well with social media. Apps and sports sites are now able to display point-by-point winning odds of teams. Not only that, but the real-time popularity of star players on social media is also showcased, bringing rival team trash-talking to a whole ‘nother digital level.

Mobile apps with updated scores are nothing new, and have been around for over five years now. Teams in all sports have caught on, encouraging fans to download team apps for up-to-the-minute stats and news along with personalized merchandise recommendations. Just opened an account with Lincoln Financial Group in Philly? Customers also bought this Eagles jersey.

Big data will only continue to influence the multi billion-dollar sports industry. Have you used data sets to improve your sport fan experience? We would love to hear about it. Let us know in the comment section below!

IoT –  Part of Your Essential Kit to Becoming More Sustainable
IoT –  Part of Your Essential Kit Jonathan Custance, Co-Founder of Green Custard outlines how industrial organisations can leverage IoT to dramatically reduce their carbon footprint  Technological progress and environmental sustainability have always been at ...
We use cookies on our website to give you the most relevant experience by remembering your preferences and repeat visits. By clicking “Accept”, you consent to the use of ALL the cookies.
.
Cookie SettingsAccept
Manage consent