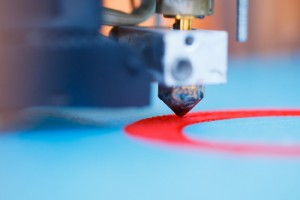 Three-dimensional (3-D) printing, commonly described as a disruptive technology, is positioned as a strong entrepreneurial opportunity for those who understand and embrace its possibilities.

Recently predicted as a technology that is going to revolutionize personalized medicine, 3D printing is set to change the world. As a team of young entrepreneurs in San Francisco are set to use the technology to invent a way to build our own personal 3D clothing, it has been heralded as a means towards a “utopian future,” as they position their project as a leader in what is likely to be “the genesis of a manufacturing revolution.”

Differently disruptive, largely because of the way it works, 3-D printing is a process that fuses or positions materials in layers to produce a 3-D object. That in itself isn’t new, but what is remarkable is how the science is growing and expanding into virtually every industry – even though virtual might seem like a flippant term in this respect!

The young San Francisco-based entrepreneurs that have positioned their revolutionary project as what is poised to be the genesis of a manufacturing revolution have done something that appears to be quite simple. They have developed a plastic box that holds a thin metal template used to make fabric from a special liquid, using a computerized process. With developing designs, they are working towards clothing that has no seams or stitching, and they have already produced some remarkable prototypes using their experimental Electroloom.

While the Electroloom is still seeking startup capital, 3-D technology is already close to being used commercially in other fields. For example, the giant French cosmetics company, L’Oreal, which has been producing human skin for research for a while already, has recently partnered with the bioprinting startup Organovo in an endeavor to manufacture skin they can use to test products for efficacy and toxicity. That is, of course, largely their way out of the animal-based research that put the beauty industry in such a bad place not that long ago. The company has already launched Makeup Genius, an app that shows users what they look like wearing L’Oreal products. Even if it doesn’t put them ahead of the beauty aesthetics field, it’s probably going to put them ahead in terms of environmental issues.

The company, which began farming “derma” in the 1980s, already has enormous laboratories that grow skin samples for research use. Their way forward is to be able to develop 3-D printed skin that they can use for a broadening range of non-prescription skin-care products. The company they are working with, Organovo, is already working in a field (with Merck) that focuses on printing liver and kidney tissue, so the technology is already well in progress. Furthermore, since L’Oreal spends more than $1 billion every year on research and development (R&D) they are likely to be going somewhere fast.

There are other innovations too. Just a few months ago, CloudTweaks ran an article about an electronic tattoo that could attach itself to the skin and stay there for about two weeks. Not a printed-on-the-skin 3D tattoo, but rather an unusual stick-on-the-skin version, its innovative quality was that it was capable of acting as a computer interface to control computer games via vocal commands. Clearly it cannot be used for all computer games, but the technological vision is there. Linked to the game-skin idea, Motorola is said to be working on ingestible pills and skin-based stickers that the company use for password purposes.

The truth is that 3-D printing has a way to go because it enables mass customization of numerous industries. Anything that allows itself to be “printed” is going to benefit. It really is that simple.