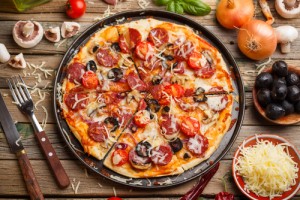 Recently, drone delivery systems have been discussed as future state plans for many vendors. I personally think the traceable IoT-based pizza delivery drone is the next big thing. If you think about it, your pizza makes it to your house much faster. Since the drone carries both a temperature and a GPS locator, you can tell how hot your pizza is and where exactly your pizza is. Traffic issues will no longer result in a soggy crust topped with lukewarm cheese disappointing your now-ravenous family after an hour-plus wait.

From the vendor perspective, there are risks, of course. The first is the pizza drone theft. Once the drone is airborne, you still have to control it. That control can be compromised and the pizza intercepted. Or worse yet, the more expensive drone would likely be stolen, as well.

Now you could change the way the drone operates. Layout simple GPS-based maps to the homes of your customers and then allow the drone to fly autonomously to the customer’s address. Once the pizza is removed from the drone, you then have the customer hit the home button and away the drone goes. In between, the drone avoids objects based on its sensors, but doesn’t have remote control options. It would also be able to have a beacon if it was unable to complete its flight home for some reason.

To reduce the overall cost, the pizza place would need to operate a number of drones (based on restaurant volume and density of population). The fleet would probably split its resources with ¼ of the drones at the pizza shop charging and waiting for deliveries. ¼ of the drones would be stopped at the customer’s location, and ¼ of the drones on the way to the customer. The final ¼ of the drones would be on the way back from the customer. Each drone would have three batteries: One charging, one already charged, and one on the drone so that they could all stay in the air. I suspect the requirement for the pizza drone system would be like the days of messenger pigeons: The “drone coop” would need to be on the roof of the building away from where people walk and eat.

If your delivery range (furthest customer from the store) is less than 10 miles, the drones would be extremely effective and faster than cars. They can fly straight to the destination like the proverbial crow, something cars cannot do. It would also allow you to expand your delivery zone. The deluxe drone could include a way to maintain the temperature of the pizza while flying greater distances.

Beyond pizza, there could also be the late night craving delivery via drone as well. They are pretty quiet in flight and could deliver those special cravings any time of the day or night without disturbing the neighbors. Back in the day, we used to have to get dressed, get in the car and head to the store for those pickle and peanut butter snacks. This way, we hop on the web and then wait on the back porch for the drone. For Apartments and Hotels, the drones would probably head toward the main entrance and text you when they arrive.

Reality says that this would have to be a credit card-driven industry. That means that since we would be using our cards more, the vendors having this service would need to do a better job of making sure those card numbers were safe. One possible solution would be integrating a secure card reader in the actual drone that would confirm receipt of the midnight snack or the pizza. Upon the door closing, the drone would route home.

This drone delivery model isn’t that far away. The drones available right now can carry upwards of 1-2 pounds. It’s a small peanut butter and a small pizza, but it isn’t that far off from drones with greater capacity. Imagine ordering pizza from your favorite place and when the kids say “where’s the pizza” you simply point at the map on your phone and say “right there.”