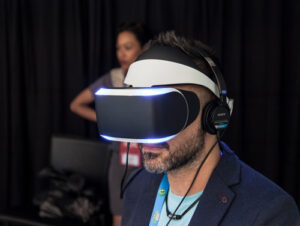 Valve’s Dota 2 Vive VR demo has made a significant impact, with Mitch Dyer of IGN raving about the latest Secret Shop Vive demo. Players are transported into the Secret Shop merchant’s cabin and are left to roam the wares including the Hyperstone and Skull Basher. While noted to be far more limited than Valve’s Aperture Science experience, the Secret Shop demo puts the Maelstrom, Necronomicon, and a glowing Tango bundle in reach of Dota 2 fans. And the finale, with Roshan ripping off the cabin roof and roaring inside, is evidently terrifying.

But VR isn’t just about Gaming. MakeUseOf’s Going “Hands On” at the US Army Virtual Reality Game Studio takes a tour through the Army Game Studio and explores video games, virtual and augmented reality, and immersive experiences. Author Andre Infante believes the Army Game Studio is a sign that the Army’s effort to adapt to technology is constructive and suggests the Army will benefit enormously from both gaming and VR technology.

The Wall Street Journal believes VR offers strong potential for performing ‘mundane’ tasks and sees nongaming applications becoming far more compelling. With many already carrying VR-ready devices in their pockets, a world immersed in virtual reality might not be far off. VR is likely to have applications in video conferencing and may reshape the social media we know today but also has tremendous potential for education and training. The opportunities available for travel are inspiring, and it won’t be long before retailers take advantage of the engrossing power of VR.

The NFL has already adopted VR technology, most recently with the Tampa Bay Buccaneers signing on with Eon Sports VR and using virtual reality practice simulations along with standard training. Other teams including the Dallas Cowboys, San Francisco 49ers, and Minnesota Vikings are purportedly starting to use the VR training simulation software too, and the Tigers are one of seven college football teams who’ve invested in STRIVR Labs virtual reality technology. The benefits are reduced injuries and health defects without diminished training opportunities, but the drawback of lowered fitness, as well as the awkward practical experience of using the headsets, still need to be considered.

SingularityHUB provides an extensive view of the future of virtual reality, observing that the number of companies dedicated to VR products and services has increased by 250% since 2012, with more than a quarter of these companies less than a year old. The US accounts for 50.8% of the entire VR environment, and while investors in the technology are still cautious, VR companies have raised $746 million in venture capital in the last five years. In the first six months of 2015, investment in VR startups was 50% higher than total investment in 2014, suggesting the industry is on the cusp of a significant evolution.