The State and Future of B2B E-Commerce 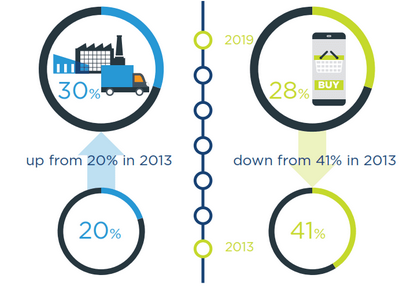 It’s official. B2B (business-to-business) companies have shifted their focus on web e-commerce to mobile e-commerce—a trend influenced by the rise of Cloud computing and SaaS connected smartphones/tablets and portable devices that have replaced the traditional PCs.

But the tables will turn in 2019, said Forrester Research analysts Peter Sheldon and Andy Hoar, as traditional B2B companies increase their spending on upgrading their e-commerce systems. By 2019, manufacturers and wholesalers will make up a combined 30 percent of spending on e-commerce technology–up from 20 percent in 2013.

Meanwhile, online retailers are expected to make up 28 percent of the 2019 spending, which is down from 41 percent in 2013. This isn’t surprising. Online retailers have already setup their own platforms, while traditional B2B companies have yet to invest money on building e-commerce websites. However, B2B companies, with lots of money in the bank, can spend more on better systems.

Companies have all the reason to go mobile. A mobile-optimized e-commerce platform generates more revenue than e-commerce sites that aren’t mobile-friendly. It isn’t enough to sell online, you need to optimize your business for mobile devices, according to a survey by Demand Gen Report.

Out of the 105 buyers surveyed, 85 percent said they require content on B2B sites to be mobile-optimized– that’s up from 69 percent in 2014. B2B buyers are getting wiser, too. Around 94 percent of B2B customers report conducting some research online before making a purchase. Additionally, 44 percent of the 94 percent used a mobile device to research an item, according to a study conducted by Acquity Group.