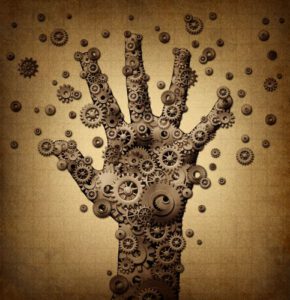 The Blended Mindset – Converging Through The Screen

It has been a long time since a phone was just a phone. In fact, people start to show their age when they refer to their device as a “cellphone.” It is far more than that. The modern portable device is capable of infinite tasks, whether it draws upon its own internal assets, or through apps that work with the rest of the world via cellular or wireless. In its immensely portable versatility, business leaders can see the future of their organizations: people and machinery demonstrating blended and agile abilities rather than sticking to one specific talent.

The smartphone (also a dated term) is a hand-held tool for life. So too is the modern car. Hand-held through the steering wheel at least, its available phone and 4G technologies, along with USB ports and remote diagnostics, turn it into an office with wheels, adaptable to any industry, from farming to construction to accounting. In a few more years, as the Internet of Things takes root, other traditionally single-function devices, from refrigerators to hospital gowns, will play a more active and diverse role in communicating back and forth between suppliers and consumers, making decisions and guiding actions.

The transformation of these devices from one-trick-ponies to jacks-of-all-trades must not go unnoticed by company leaders, since it reflects two levels of progress: machine and human. In league with technological change, people too are becoming more versatile in their skills and approaches, rendering the traditional career path and organizational chart hierarchy somewhat redundant.

Take IT as an example. In earlier years, the IT department lived and worked in essential isolation, its employees using their wizardry to ensure that networks and personal computers functioned properly and safely. But in recent times, the IT manager has been given a wider range of responsibility. No company operating today can consider itself relevant if it does not offer IT and security executives a seat at the C-suite table. With an ever-increasing variety and sophistication of cyber-attacks, the necessity of migrating to the cloud and the pressure to translate commerce into an omni-channel universe, IT executives must offer strategic leadership advice in concert with the technical facts.

IT, like all other departments in an organization, can no longer operate inside a silo. The silo has been flattened. Departments can now see each other better and talk to each other; but more importantly, they are becoming each other.

These “possessions” – like tiles that make up an individual personal mosaic – indicate skills and powers that an agile organization might see fit to employ for a certain task at a certain moment in time, without resorting to the traditions of seniority or process. This demands the same type of agility and versatility that exists within a mobile device.

More significantly, it matches the mindset demonstrated by the modern world’s most successful leaders such as Elon Musk and Steve Jobs. These individuals are mentioned often simply because they blend their fierce commitment to their sense of destiny, with a willingness to change and adapt to better ideas. This is the blended mindset that exists at the pinnacle of a successful company’s management structure, and which can and must be discovered and encouraged throughout the entire organization.

Human beings are very good at learning and adapting. Modern education need not enforce the traditional multi-year, Ivy-League style in order to yield practical skills and abilities; there are numerous online educational systems that give the knowledge away for free. Just like Elon Musk did with the code behind Tesla, openness and versatility continue to drive modern commerce.

It is very natural for those in positions of senior responsibility to greet the modern age of change with mistrust. But this is the age in which business is now being done. It will be of greater value for a company to shore up its presence on a growing social media platform – especially those favored by the younger generations, whose economic and social influence reaches every corner of the world economy – than to focus on more traditional mailing lists and CRM techniques from a decade ago. Business effectiveness in the next few years depends a great deal on a shift of mindset, from channels and hierarchies to an open concept, which pulls diverse and blending talents from all corners of a company’s human and technical resources to solve problems in real time and test them as they unfold.

Every time company leaders take their mobile phone out of their pocket, they should look at it anew. This is a device whose value exceeds the sum of its parts, and for which the telephone feature is merely a bit player. This is a blended device, and it has changed the world by virtue of its openness. And so will it be for businesses everywhere.

For more on this topic, go to businessvalueexchange.com sponsored by Hewlett Packard Enterprise.