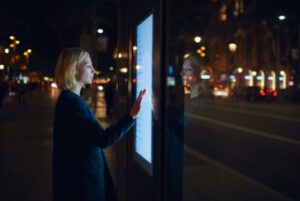 Smart Cities: What Will The Future Bring?

As the digital world empowers us and gives us access to more information than ever before, it comes as no surprise that ‘smart cities’ are quickly becoming a reality, and soon will become more commonplace across the globe. Governments across the world are keen for their cities to become part of a environment that allows cloud-connected devices to collect data about a city’s surroundings and inhabitants.

While this may sound a little intrusive at first, it’s worth remembering that to make a city a success, data has to be collected in some form. Before the birth of the Internet, this may have been done in a number of ways. For example, if something was damaged within the city, then someone would report it and then it would be rectified.

Cutting Out The Middleman

The aim of a smart city is to cut out the middleman, and offer those who reside in the city a more pro-active solution that will allow for the automation of data collecting via a number of different devices to create an infrastructure that looks to benefit the population of the city.

And while there a number of benefits for those who reside in the city, the businesses located within a smart city also look to benefit from the infrastructure. Those who use social networks will have at some point realized that they are faced with online adverts that suit their preferences. A similar practice can be implemented into a smart city, with businesses making offers based on your recent spending habits, and even the way you feel.

The fact that a city is run by a series of connected devices could even change the way we travel. There’s no mistake that driverless cars are the catalyst for smart cities, and while driverless cars are still to make their debut officially, they will offer a number of benefits both for those being transported, and the environment overall.

Many drivers will have been caught up is some sort of traffic jam, or find themselves waiting in a huge line due to an accident that has occurred on the road. An autonomous car will be able to collect data from a range of different devices, advising the driverless car of the dangers ahead, which would therefore take the passenger to their destination via an alternative route.

This means that traffic managements is a more organized affair, and passengers should find that their ride into work is far cry from the long winded and stressful endeavor they’ve had to endure in the past.

As the driverless cars will be electric, the environment will benefit from cleaner air, which means the smart city itself will be a more desirable place to live. It also means that the urban population will become more efficient, and the over-burdening of public transport will become a thing of the past as shared rides become available.

There also plans to monitor how energy is being used. The real-time stats that can be recorded will allow cities to reduce emissions, as well as saving the city money.

One project has already been launched by NYU’s Center for Urban Science and Progress within New York City’s Hudson Yards, and data will be monitored in relation to air quality energy production and pedestrian traffic among other things.

There are those who may scoff at the idea of a smart city, for fear that the data being collected is available to cyber criminals. While in theory, this isn’t out of the realms of possibility, the conversion to a smart city will be one where a great deal of research has to be carried out in relation to a robust security solution, as well as a contingency plan should the worst-case scenario scenario.

Many faults can be picked out of a world that conforming to embrace the digital era more than ever, but give the current financial climate of the world, having the ability to view real-time data in relation to a number of a different occurrences within the city allows those in charge to make pro-active decisions in the way we use energy, water and road vehicles.

Evidently, there will be a great deal of change associated with the conversion of cities across the globe, but up to now, may have adopted rapid changes within the technological world with relative ease. As we rely on smart devices every day, it makes sense to use the technology available to shape a better and cleaner future.