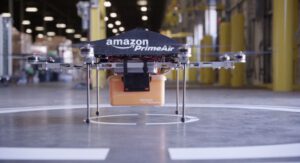 Your day at the office is coming to an end when you remember that you promised your wife you’d pick up the limited edition signed Kenny Rogers box set she saw advertised on television. It’s too late to hit the stores, but with just a few clicks of a button, you’ve bought it through your regular Amazon account. You shut down for the night and set off for home in the rush hour traffic. Your regular commute takes 30 minutes and as you arrive home, you hear The Gambler piping out of your bedroom window, while a small, unmanned aircraft takes off from your front lawn and into the skies.

That scenario, once the stuff of science fiction fantasy, is rapidly becoming a reality for Amazon and it’s Prime Air. If you’re in a 10 mile radius and your package weighs less than 5lb, Amazon believes you should have it within half an hour. “So Prime Air is a future delivery service that will get packages to customers within 30 minutes of them ordering it online at Amazon.com,” says Amazon’s vice president for global public policy, Paul Misener.

It doesn’t seem that long ago that the idea of drone delivery was first introduced by Amazon, and now all that really stands in its way is a framework that will regulate a whole new generation of aircraft and a whole new industry. The FAA has remained insistent that drones must always be piloted by a human being and remain within the sight lines of that pilot. But on a panel at technology showcase CES in Las Vegas last week, the tech industry implored the FAA to deliver a set of guidelines against which they could test the safety and viability of a large-scale drone delivery fleet.

Amazon has already proposed guidelines to the FAA which they think could work. “Manned aircraft above 500 feet. Between 400 and 500 feet there’d be a no-fly zone—a safety buffer,” said Misener. “Between 200 and 400 feet would be a transit zone, where drones could fly fairly quickly, horizontally. And then below 200 feet, that would be limited to certain operations.”

It’s not as if the FAA are not considering changes to the legislation. The first drone delivery approved by the FAA took place in July of last year in Wise County, Virginia, when Australian drone-delivery startup, Flirtey, carried a pack of medical supplies from an airfield to a clinic 35 miles away.

While the potential for drone delivery in disaster zones or emergency situations is universally acknowledged, it’s the day to day commercial use of product delivery that has people wondering if this is the future we really want to contemplate. Naysayers predict a future when the skies are crowded with hundreds of commercial drones and there is a reasonable chance that things will go wrong, sending unmanned objects and cargo hurtling into people’s homes and gardens.

But Misener is undeterred. “Challenges are there, for sure, but once we demonstrate that this is safe, we’ll be able to take it to the regulators and hopefully deploy it for our customers quickly,” he told ArsTechnica. “I’ve seen it. It’s gonna happen. It’s coming...”