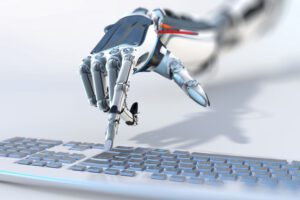 The industrial revolution of more than two centuries ago is viewed today as a major turning point in civilization wherein a predominantly agrarian and rural landscape became urbanized and industrial. Though we might imagine these changes would have been rousing and remarkable to those experiencing them, the 60 to 80 year period will probably one day be likened to the revolution we are, and have been, experiencing ourselves of late, often taking the extraordinary changes and startling possibilities for granted. From Bitcoin to IoT, Big Data to AI, the world is experiencing a new industrial revolution as likely to transform the fabric of society as the first revolution.

A recent Word Economic Forum (WEF) survey found that 58% of the 800 surveyed experts believe that by 2025 10% of the global gross domestic product will be stored on blockchain technology. Digital currencies and systems such as Bitcoin and Ethereum provide machines with their own Bitcoin addresses, functioning similarly to bank accounts thanks to Bitcoin’s ‘permissionless’ features, and combined with other tech effectively allow machines to manage and allocate funds according to specified rules. With particular regard to access of data, it’s been suggested that decentralized autonomous organizations (DAO) be created allowing machines to digitally pay for and retrieve data according to pre-established code.

The above mentioned WEF survey also found that almost 90% of respondents believe the Internet of Things (IoT) will achieve one trillion connected devices in ten years. We’re already closing in on the Jetsons’ lifestyle of homes ‘managing’ themselves, driverless cars, and remote communication devices – though sadly holographic communication hasn’t quite made it to the mainstream yet. In 2013, Cisco estimated the IoT market would reach nearly $15 trillion in the following decade, and nothing we’re seeing now gives reason to doubt the validity of their prediction.

In the first half of 2015, over 14,000 robots valued at $840 million were ordered from robotics companies in North America, a new record and 7% increase in revenue versus the same period in 2014.

On the other side of the globe, China is making strong moves in the robotics and artificial intelligence (AI) fields, recently unveiling a personal service robot BIG-I, nicknamed ‘butler’. According to the International Federation of Robotics (IFR), China’s noteworthy advances in robotics development in both the electronics and automobile sectors will lead to China’s dominance of world robotics manufacturing, and says IFR General Secretary Gudrun Litzenberger, “Companies are forced to invest ever more in robotics to be more productive and raise quality. In the current phase it’s the auto industry, but in the next two or three years, it will be driven by the electronics industry.”

Further areas of note include the significant impact of cloud computing on our day to day and business lives, the broadening grasp and use of big data and data analytics, the innovations and possibilities of 3D printing on both a micro and macro scale, and many other technological advances. Take a minute to consider your life in this most recent industrial revolution; it’s almost impossible to imagine what the next 60 years will bring.