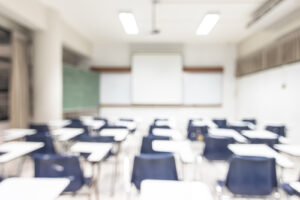 Customized edtech learning solutions are becoming more commonplace as the education industry recognises their potential and begins transforming the traditional structures so as to incorporate innovative developments. From textbooks to tablets, chalkboards to virtual reality, edtech promises not only dynamic and exciting learning environments but better learning strategies and solutions.

Potentially one of the next prodigious education tools, in the last few years virtual reality has made strides that have quickly moved it from the realm of sci-fi to an accepted part of mainstream technology. From expensive and feature-rich products to budget-friendly minimalist models, we’re exposed to headlined Oculus Rift loaded with sensors and providing a display for each eye along with integrated headphones, PlayStation VR accessorising the PS4 console, Samsung Gear VR supporting a smartphone rather than connecting to either PC or console, and Google Cardboard with its universal convenience supporting a wide range of smartphones and boasting minimal, often no, hardware costs.

Developers interested in the merging of virtual reality technology with education are exploring a wide range of paths, some focusing on its benefits to history through series which allow students to ‘jump right into’ historical moments and experience the events themselves, and others using simulation platforms to teach students practical skills through hands-on practice instead of relying on theoretical knowledge alone. Considering the dynamic people that virtual reality tends to attract, including game designers, artists and filmmakers, the combined industry of education and virtual reality has the potential to turn education into an exciting and progressive field.

On the other side of the spectrum, edtech is also tackling the far less glamorous challenge of bringing education to developing countries. One study into technology and education in Hyderabad, India, and the low-fee private school (LFPS) sector, with a combined research team from the Hyderabad Urban Lab, University of Massachusetts and New York University, explores how city-wide firms can contribute to tech-focused education solutions. The study notes, “Within Hyderabad, an extensive network of multinational corporations, private foundations, consultants, NGOs and local entrepreneurs are building what they term an ‘educational ecosystem’ to support the commercialisation of all aspects of education.” The presence of a strong IT industry means the setting is ideal for the development of a parallel edutech industry able to service schools in both the public and private sectors.

Suggests Sangeeta Kamat, co-author of the study from the University of Massachusetts, “Edu-solution companies try out their model in Hyderabad and then sell their product in other developing countries such as Africa, Nigeria where the target audience is the same (students from LFPS). International companies investing in the LFPS sector are looking at the bigger picture. Although the revenue model is not so strong in India, they know that the population in much higher in LFPS as compared to international schools.”

Of course, there are some who believe technology’s place in education should be far more carefully considered and supervised, and a study at West Point has found that “students perform better academically when laptops and tablets are banned from the classroom.” According to this research, male students and students entering college with high GPAs are the most likely to suffer from distraction due to device interference. A few potential reasons have been suggested for the negative effects of laptops and tablets, including that digital note taking isn’t as effective as writing notes by hand. It’s also possible that the ways in which classes are taught need to be developed to suit the technology implemented, but we can’t discount the fact that technology introduces many, many new distractions that might simply be more enticing to students than the work at hand.

Like it or not, edtech is progressing, and our schools and universities will have to meet the challenges and embrace the rewards; a lot of elbow grease, along with the willingness to try, fail, adapt, and start again, and technology could be informing education in a host of beneficial ways.