What Is Net Neutrality And Why Is It So Important? 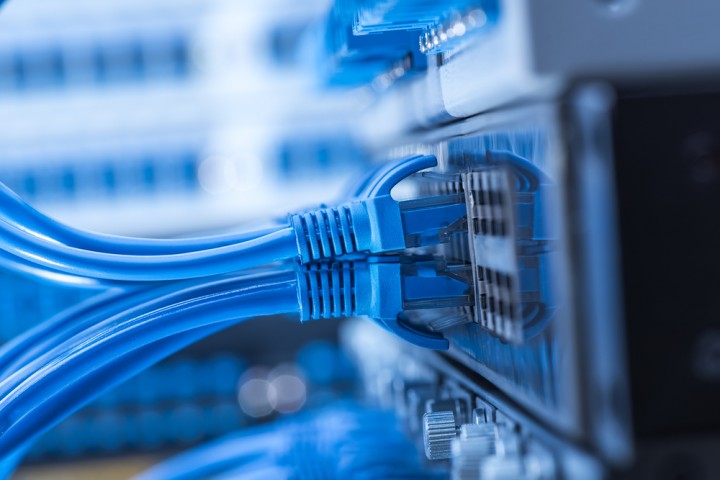 What Is Net Neutrality?

Net neutrality is a concept that has been the centre of a lot of debates recently, it is based on the idea that all internet traffic should be treated equally by your internet service provider. The fact that all traffic has (in most countries across the world) been treated equally, is one of the greatest strengths of the internet – it is a level playing field.

However, there is a risk at the moment that it could all change. Large ISP providers like AT&T, Verizon, and Comcast want to classify different types of traffic and treat them differently so they can charge you more depending on what you use, and potentially even restrict content that they disagree with.

There are several fundamental fears that drive people to advocate for net neutrality. Firstly, they fear that without it, ISPs (Internet Service Providers) could provide a “fast lane” to “favoured” (and what many suspect will be sponsored) content. They also fear that it could restrict market accessibility, by preventing small businesses from getting a step on the ladder, and thus lead to ever more entrenched monopolies. Finally, they worry that some ISPs would strategically slow the speed of websites who can’t afford to pay (or who don’t want to), holding young businesses to ransom as a result of their poor service.

There are a number of independent sites and organisations, such as theopeninter.net, that promote and advocate for net neutrality and seek to spread the word about its importance to society. They argue that free and open internet is important because,

Theopeninter.net was created by entrepreneur Michael Ciarlo and his story is the perfect example of the why net neutrality is so important; without net neutrality many people may not have been able to find his site, and his message would be lost. A level playing field of access and bandwidth is key to ensuring the internet continues to promote innovation and collaboration across the world.

Thisisnetneutrality.org suggests that there is need to preserve the openness of the internet, in order to ensure its continued success. They argue that

“The open internet has fostered unprecedented creativity, innovation and access to knowledge and to other kinds of social, economic, cultural, and political opportunities across the globe”

There is no argument against the fact that service providers shouldn’t be able to manage their networks. However, a line needs to be drawn to prevent the service providers from becoming the gate-keepers of internet content, attempting to limit access to certain parts of the internet, or even trying to police or censor our online experience.

As you can see from the map here, there hasn’t been many countries so far that have put actual legislation in place. However, access around the world at the minute in most countries is essentially unrestricted and completely neutral, as you can see from this map which was assembled using internet speed data as opposed to looking at legal precedent or legislation. However, there have been efforts to legally secure this trend and ensure the survival of net neutrality.

Brazil has been arguably the most successful at attempting to codify net neutrality and protect it, through the passing of what was dubbed as Brazil’s “Internet Constitution”. The law was adopted the legislation in April 2014, and prevents ISPs from charging higher rates for access to content that requires more bandwidth, such as Netflix; as well as limiting the gathering of metadata, and holds corporations, like Facebook and Google, accountable for the security of Brazilians’ data, even when it is stored abroad.

I like to think of the internet as a globalised and modernised version of the American dream. It can provide a fresh start or blank canvass for anyone who wants to sell their product, spread their message, or just go viral with a home video. The quality of the content is what matters, not where it came from.

Net neutrality seems like a simple issue of corporations and big business fighting for Government to open up more avenues for profit. However, despite the calls from the majority of the tech community to uphold net neutrality, there are those who oppose the idea, and not just those who are paid by telecoms giants or lobby groups.

In an article for Forbes, Josh Steimle questioned why he seemed to be the only techie against the idea of net neutrality. He disputed that there are more than just 2 sides to the argument; that you are either for or against corporations having “control” of what you can see on the internet. He isn’t against net neutrality as a concept, rather his concerns lie with net neutrality in terms of legislation or public policy. He outlined 3 reasons for his concerns that I feel perfectly frame the best arguments opposing net neutrality:

The reason that telecoms have so much power is not in spite of government regulation; it is because of government regulation. If net neutrality is passed in legislation it may become more difficult for new companies to offer internet services, and we could end up more beholden to ISPs than before. However, if telecoms have to compete in a truly free market. For example, in the US, Comcast and Time Warner would be replaced by better cheaper options unless they remain competitive. If you want to break up monopolies you have to eliminate regulations, not enhance them. The problem here is that there needs to be some change in legislation to allow the market to become more open, otherwise ISPs won’t be challenged in their monopolies.

Free Speech cannot exist without privacy; so should we trust the government to be the gate-keepers of our privacy? Under net neutrality legislation the government would either have to trust the ISPs to regulate themselves, or the government would have to become the regulatory body. There is fear in the tech community that government monitoring could go further than simply monitoring, given the revelations in Glen Greenwald’s book No Place to Hide  that the U.S. government has been tampering with Internet routers in collaboration with the NSA.

What this argument fails to consider is that without some form of regulation and oversight, there is always likely to be abuses of power – that is unfortunately the nature of the world we live in. The difference is when government provides that oversight, that we can hold them to account, question them, and even vote them out of power. Corporations and large ISPs don’t answer to the public in the way government does.

Any form of legislation or regulation is a limit to freedom and the free market. In an ideal world, governments always act with the best interests of their people at the heart of what they do. However, this is rarely the case, politics is a dirty business and corporate interests and lobby groups often have more influence than many of us realise. The fear is that any form of legislation will be influenced by these large groups to benefit them, in ways that may seem to be for the good of the people. Regulation in any form should be viewed as a restriction on freedoms in the long run.

However, this seems like a cynical view of government (though it is perhaps not too far from the truth) and, much like the previous argument, it fails to consider that government can be held to account.

Although there are a number of arguments against the adoption of net neutrality, including one ISP who claims it would be a restriction of free speech, the general consensus seems to be that, if done right, it is the most effective way to secure free speech and ensure that the internet remains a level playing field. We have to trust someone to regulate ISPs in some way, so is it better to trust the ISPs themselves? Or to trust the institutions that the people can hold to account?

AT&T announced that they had reached a deal to buy Time Warner in a deal worth $85.4 million, a move that could create arguably one of the most powerful media companies in the world. This would mean that AT&T (a telecommunications provider) would merge with a content provider in Time Warner, thus creating the possibility for conflict to net neutrality if AT&T were to provide faster than normal access to Time Warner content. The merger would represent another step towards mass media consolidation over the past few decades (See Fig. 1); it is not the first deal of its kind to be attempted and nor will it be the last. 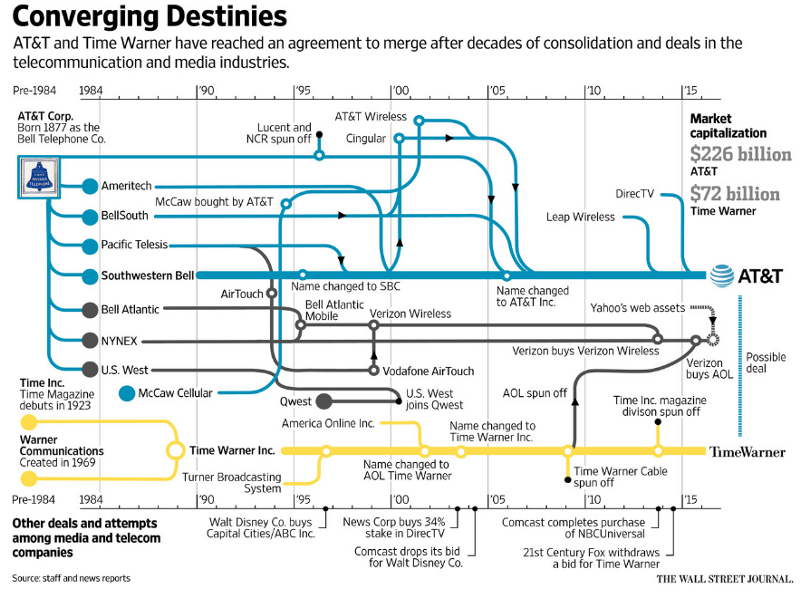 2016 has brought with it a number of media consolidations and acquisitions that have included Comcast’s (CMCSA) acquisition of DreamWorks Animation (DWA) for $3.8 billion, and AT&T’s 4-year deal with DirecTV.

This deal has gained opposition from all sides of the political spectrum, from the far left and the alt right. Bernie Sanders has come out in opposition to the deal, warning, in a letter to the Justice Department, that the deal could lead to “gross concentration of power” in news media, and that preventing the deal would help “preserve our democratic discourse and open competitive markets for speech and commerce”.

From the right, President Elect Donald Trump has been highly critical of the deal. At a campaign rally in Pennsylvania last month he echoed Sander’s sentiments,

“As an example of the power structure I’m fighting, AT&T is buying Time Warner and thus CNN, a deal we will not approve in my administration because it’s too much concentration of power in the hands of too few”

This is actually a rare issue that has bi-partisan support from all parts of the political spectrum, though there have been suggestions that Trump may be forced to back down a little on the deal as a result of more traditional republican values.

As for the deal itself, AT&T declared that it would create a “new company with complementary strengths to lead the next wave of innovation in converging media and communications industry“”. This has triggered speculation that the deal could lead to another round of consolidation of service and content providers in the same ilk as the AT&T-Time Warner deal – as well as fear of growing competition from tech giants like Facebook, Google, and Apple. These huge content and service providing monoliths are a serious fear for those who value the idea of net neutrality; the more consolidation there is between content and provider the more the lines will become blurred, and net neutrality will be the victim.

The issue of net neutrality is, like many modern issues, a complex and nuanced concept. There are many warring factions pulling in a multitude of different directions, often with conflicting and hidden motives. It is impossible at times to separate those who oppose and support net neutrality for the right reasons, from those who do it for the wrong reasons. Ultimately it comes down to a case of freedom.

In contrast, those who support net neutrality, place faith in government to regulate net neutrality as an utterly independent body, that has no scope to be influenced or manipulated. This is somewhat naïve.

However, net neutrality is what truly makes the internet the unparalleled bastion of collaboration, connection, and globalisation, that it has become today. Many look to states where the internet is controlled by the powers at be, like China or North Korea, and take pity on those whose internet service is vetted by an outside party or government. Without proper safeguards or guarantees of net neutrality, we as a population become open to the same kinds of manipulation. Net neutrality is about enshrining the free market, not limiting it.