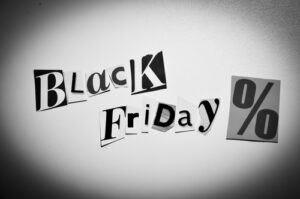 When The Cloud Comes To The Black Friday Table

Black Friday, as most people know, is the busiest shopping day of the year, occurring immediately after U.S. Thanksgiving, and ushering in the “official” beginning of the Christmas/Holiday shopping season. Its name has come to represent the time of the year at which most retailers start to turn a profit (operating in the black), as opposed to running at a loss (in the red) as they have been doing since January 1. Although this dire financial situation does not apply to all retailers everywhere, it is no surprise that the onslaught of aggressive, deal-hungry shoppers delivers a fresh wave of commerce and cash, much like a coastal ocean swell replenishing a tide pool.

Cloud technology has a major role to play in supporting the activities of the Black Friday weekend of course, first by managing the spike in commercial transactions that happens on the Friday and the weekend, and then secondly in coordinating the online sales that occur on the following “Cyber Monday,” a relatively more recent tradition in which shoppers turn to online retailers to complete the shopping they could not finish over the weekend. Retailers the world over now rely on the cloud to fulfill every element of the retail process from the pre-season wholesale ordering of goods through to post-sale delivery and customer service, and everything in between.

Though, Black Friday still seems to be a retail-oriented phenomenon, aimed squarely at consumers – the public – the B2C arena. Seasonal deals in the business-to-business (B2B) sphere are few and far between, and seem relegated to the primary levels of the industry, such as the occasional cloud hosting or web page-hosting provider offering up extra space for any new customers that sign up on this special weekend.

How long might it be before the world sees “Black Friday” sales on a higher-level? A cloud industry level? For a start, the increased awareness of the need for high-performance cloud technology in support of this busy retail season can easily translate into a plethora of conversations about robust cloud technology in areas such as analytics, security, application development and migration.

If one were to accept the notion that Black Friday was thus named for the arrival of profits, rather than losses in a storekeeper’s books, then today’s retail madness was actually born out of an accounting term. If the world can translate an event from “accounting” to “shopping”, then it might be just as easy to reconfigure the Black Friday concept from “retail” to “industry”.

Selling cloud technology is a big and very tangible business, as can be seen by the number of major trade shows and events that occur around the world, hosted in huge convention centers and attracting thousands of delegates. Although virtualization may be a central theme of cloud, there are still many solid parts to the machines behind it, and these need to be seen, touched and experienced by business buyers.

Although cloud has no season, techniques for selling cloud technology follow the same traditions as selling cars, phones and video games: newer equals better, cheaper, sexier, with more features and greater reliability. Cloud technology has made great strides in separating itself from old-school mainframe ideologies, through its current marketing approaches and its open-source attitude. Very soon, as in a couple of years soon, it is highly likely that the new generation of business-to-business will take a page from its retail sibling and start to sell its wares seasonally.