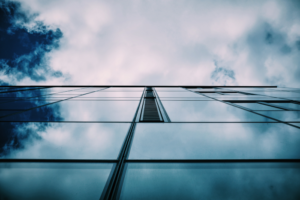 Financial Services and the Blockchain Government

If you have had your head buried in the sand for the last few years, you might not have noticed the massive groundswell of support, discussion, and investment, in the technology that that has been touted as the next revolution in society. Blockchain is, in layman’s terms, a data structure that allows for the creation of a digital ledger shared across a peer to peer network. Each new transaction or addition is verified by participants in the Blockchain, who run algorithms to verify the new transaction, securing them with cryptography, and linking this new block of information to the chain of previous transactions. It is essentially impossible to recreate or hack, and crucially does not rely on “middle men” that dominate our world today.

Blockchain was first conceived as an economic idea, one that would decentralize and revitalize the lumbering financial services. However, financial services are but one use of Blockchain, there is potential for the technology to disrupt governance and Government in a way never seen before.

This technology is already being rolled out and tested across the globe. For example in Delaware, Governor Jack Markell announced two recent Blockchain initiatives under the slug line “Delaware is open for Blockchain business”. They are currently moving archival records to an open distributed Blockchain based ledger in an attempt to streamline the cost and paperwork burden of registering new companies in the state. By using Blockchain to automate and decentralize registration processes for new businesses and corporation’s records become permanent, untouchable, and transparent. Markell declared at the time that,

“Distributed ledger shares hold the promise of immediate clearance, immediate settlement, and bring about dramatic increase in efficiency and speed and an increase in commercial transactions of which Delaware is known.”

Estonia of all places, is one of the world leaders in using Blockchain technology for governance purposes. Blockchain powers one of their most innovative schemes, the e-residency program. Each individual is given a digital ID card with a cryptographic key that allows you to sign digital documents, open bank accounts, set up an Estonian company, and most recently, vote electronically. They have also founded a healthcare program, where medical records are tracked and stored, with you as the user in control of your own data – an idea that has been long touted as a way to truly monetize the data that large companies and big data firms are so desperate for!

Dubai have committed themselves to the next level of Blockchain, with the government unveiling plans to move all of its documents on a Blockchain by the year 2020. The idea here is to streamline all government services so that you only have to give your details once to create a permanent record for yourself. According to Hamdan bin Mohammed, the hereditary Prince to the crown of Dubai,

There are also possibilities for Blockchain to be used to prevent land disputes. The Republic of Georgia is developing a Blockchain land registry in conjunction with bitcoin mining company Bitfury, in an attempt to reduce corruption and improve transparency. Valery Vavilov, chief Executive of BitFury, cites the three reasons that this technology is being rolled out; so the data is secure and incorruptible, to enable real time auditing, and to reduce the friction and cost associated with property rights registration.

Blockchain could also be used to help distribute government grants and welfare without risk of fraud or misuse. The UK government’s Department of Work and Pensions is currently spearheading an experiment in which a Blockchain system is used to distribute welfare payments. Recipients will be able to receive payments directly to their phones, with all transactions being recorded on a distributed ledger service. GovCoin Systems Limited, one of the companies involved in this project trial, believes distributed ledger technology can save $1 trillion annually due to friction and fraud.

Perhaps the most romantic and idealistic use for Blockchain in government is to make it utterly transparent. With Blockchain technology government records would be immutable and accessible to every citizen in the country, super-PAC funding would no longer be anonymous, and donations could be traced to their very source. Blockchain is a way to revive our trust and belief in the institutions that have lost our faith (deservedly or not) – transparent government is the future, and Blockchain can take us there.