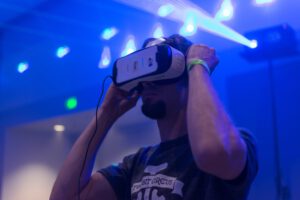 As far as many gamers are concerned, the future of video games lies in two main areas: the cloud and virtual reality. Each entity is poised to influence the gaming industry on its own, and in the not-so-distant future they will work together as well.

Here is a look at cloud gaming and how it will make virtual reality games more popular.

Gaming and the Cloud

There are essentially two types of cloud gaming. One revolves around video streaming, in which the player interacts with a game running on a remote server. The other version is more of a hybrid setup, in which much of the heavy lifting processing is done in the cloud, meaning all you basically need is an internet connection.

One of the most popular recent cloud-based games is the mobile hit Pokémon GO, which stores much of the game’s information in the cloud. The game also features an augmented reality element — the ability to use your device’s camera to immerse yourself in the virtual world — that is a small hint at where cloud-based VR games may one day go.

Cloud Gaming has been around for some time but has generally failed to live up to gamers’ expectations. Like many new technologies, the main issue was unrealistically high expectations. Cloud gaming is now beginning to resemble what many gamers hoped it would be four or five years ago.

There is little debating that virtual reality is the most recent significant innovation in the home-gaming market. The lone drawback is, similar to cloud gaming, the reality has yet to live up to gamers’ hopes.

That said, VR headsets become more and more common each month, and the machines that run VR software are only getting more powerful. This style of gaming relies heavily on 3D motion capturing, and that means a key for game designers is knowing how motion systems work.

All of the components needed for a successful VR experience — immersive worlds, top-notch motion-captured graphics, and smooth frame rates — mean a high-powered PC or gaming console is necessary for the best results. This has caused VR to grow a bit slower than many originally hoped.

For example, VR games on the likes of Sony’s PlayStation 4 can be enjoyable, but the system’s specs aren’t quite there yet. On the flip side, you can get a truly awe-inspiring VR experience using a PC with high-end components, but that will cost you thousands of dollars.

Where (and When) VR and the Cloud Meet

The cloud can help jumpstart the VR gaming industry. In fact, some say that VR and the cloud belong together. The cloud can already bring high-quality gaming to the masses, even those who don’t have top-end systems. In fact, that’s one reason why demand for cloud gaming is high: if you have an old-school laptop that doesn’t boast the latest high-end processor or graphics card, you could still theoretically play new AAA game titles using the cloud since the processing and graphical work is handled on the remote server.

Now, apply that thought to VR gaming. The best VR experiences take place using high-powered systems that are out of most gamers’ budgets. If that problem is addressed in the cloud, allowing gamers to essentially stream VR games and experiences from remote servers, it will make VR gaming much more accessible.

It can still be a somewhat pricey endeavor. After all, you will still need a VR headset to play the games, and they are certainly not cheap. Sony’s PlayStation VR headset costs roughly $400, while the Oculus Rift costs $600 and the HTC Vive $800.

The prices will decrease as the technology becomes more ubiquitous and cheaper to produce, but price remains a reason why VR gaming hasn’t become as widespread or mainstream as some thought it would. After you initially invest in the headset, you still need to buy a system capable of running the games. The cloud can help alleviate high costs for hardware and make VR more affordable.

Gamers have had high hopes for both cloud gaming and VR gaming for years. Neither has initially caught on as quickly some hoped or thought, but combining cloud gaming and VR seems like the next logical step in the evolution of the gaming industry as a whole.