Here’s How AI Startups Are Doing

Now that artificial intelligence (AI) is part of the mainstream, companies are rapidly investigating what they can do to develop new AI technologies that will make society better and translate to substantial profits for their startups.

These AI startups continually capture the headlines, but how are they really doing? Here’s some information to help answer that question.

Funding is essential for today’s startups, whether those companies depend on AI or not. Addepto Research carried out a study to find out how AI startups fared when seeking venture capital (VC) funding through seed rounds as well as Series A and Series B efforts. The results showed that all VC funding for AI startups was more substantial than it was for non-AI funds.

The difference was most significant for Series A funding. AI companies received 128% more from VCs during Series A than their non-AI counterparts. This study alone doesn’t confirm that AI companies have trouble-free quests to get funding, but it suggests that VCs are highly interested in AI startups and that they’re willing to give more to them than others.

The study cited above illustrates that VC companies are more eager to give to AI companies than non-AI counterparts. Another study published recently shows a different but related trend. Research from GlobalData examined the behavior of some of the leading VC companies concerning their AI investments.

The new study discovered that the top 10 VC firms participated in a total of 150 AI company funding rounds in 2018, showing an increase of 66.77% over the average from 2014 to 2017. Additionally, American VC firms led the way in total investment value for AI companies, but China is catching up concerning the share of investment value.

While these conclusions could mean good news for AI startups that want VC assistance, it could also mean they need to work harder than ever to stand out from the crowd. It’s a positive thing that VC companies take part in AI funding rounds more frequently than before, but a consequence is that more AI companies will likely push to get a piece of the pie.

The uncertainty associated with startups is exciting for some but makes other job seekers steer clear because they prefer more stability. The goal of finding adequate talent is especially daunting for startups in the AI space. An in-depth report from MMC Ventures (PDF) profiled the state of AI in 2019 and focused on AI expertise in one of its sections. 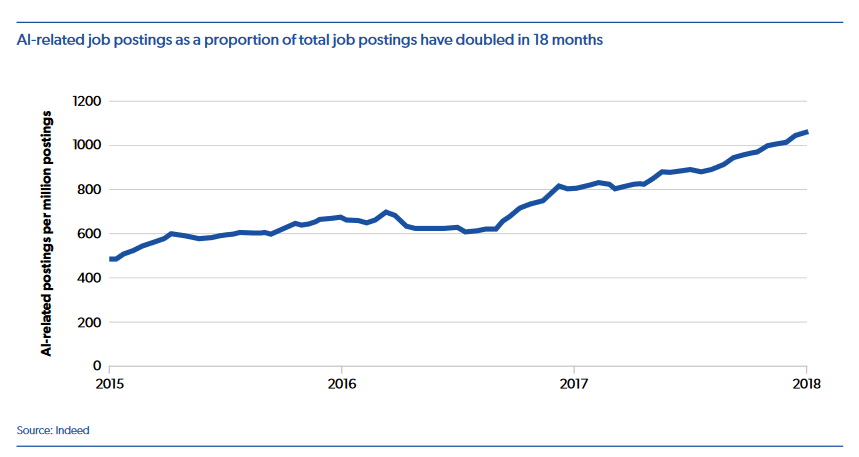 The document mentioned how AI job postings have almost doubled in 24 months. The global pool of AI talent is growing, but it’s still too small to keep up with the climbing demand for AI tech. For example, the MMC report mentioned how estimates for the total number of people with AI skills worldwide varies, but it could be as small as 22,000 highly trained AI specialists.

Beyond the gap between available talent and demand, AI startups must ensure that they do everything they can to make their enterprises as appealing as possible to prospective candidates. For example, there’s a growing trend of startups offering employee stock ownership plans (ESOPs) to their workers. Those incentives could increase employee morale and make them more productive because an ESOP gives workers ownership stakes.

Benefits to company leaders exist too. For example, ESOP transactions allow the owner to sell part of the company while remaining involved in the day-to-day operations. Moreover, ESOP-owned companies are less likely to participate in layoffs than their counterparts — even during recessions.

Another hopeful sign of a prosperous AI startup industry in 2019 is that all kinds of AI companies have found success this year so far. For example, Tachyus, a company developing AI systems for the oil and gas sector, recently secured $15 million in a Series B round, while KenSci got million to further its AI risk prediction tool for health care.

There are also broad trends involving AI that have earned exceptional interest from industry leaders who want to start working with AI. Ford and Volkswagen are working with Argo AI to move autonomous car technology forward. Argo AI is Ford’s self-driving car partner, and Volkswagen committed to a $2.6 billion investment in the company.

In a different example of how AI could improve industrial robotics, a company called Veo Robotics uses technology including AI and computer vision to allow heavy-duty robots to work alongside humans instead of staying confined to their safety cages. Sensors detect people and give feedback so that the robots behave accordingly and don’t cause hazards. The company has so far raised $28 million in investor funding.

Enterprises increasingly determine that they need AI to defend against cyber threats too. The diversity of uses for AI means that startups can find success in numerous industries, provided they develop relevant technologies that are unlike what already exists.

A Promising Landscape for AI Startups

This overview shows that AI startups have a lot to think positively about as they make plans for what’s ahead. Of course, there are cases where AI startups fail even when they initially generate much-needed buzz.

Overall, though, investors are getting on board with AI more frequently than in the past, which means AI startups have more potential for prosperity.