Is Your Data Safe In The Cloud?

Cloud Data Safety This year has certainly been troublesome for businesses when it comes to data security. Numerous cyber attacks

After appointing a new CEO and CFO last summer, cloud infrastructure provider DigitalOcean is embarking on a wider reorganisation: the

The Best IoT Companies To Work

Employees would most recommend the following companies to their friends looking for a job in IoT:  IGEL, SAP, ARM, Fortinet, Google, Microsoft, Bosch, Samsara, Schneider Electric, Siemens, Dell Technologies, Red Hat, Cisco Systems and Trend Micro. These 14 companies are the highest rated by employees working for them based on a comparison of Computer Reseller News’ Internet of Things 50, 2019  with their respective Glassdoor scores as of today, Sunday, August 18, 2019.

Forbes readers’ most frequent requests center on which companies are the best to work for in emerging technology fields, including IoT. The Computer Reseller News’ Internet of Things 50, 2019 list of companies is used to complete the analysis as it is an impartial, independent list created by CRN. Using the CRN list as a foundation, the following analysis captures the best companies in their respective areas today.

Comparing the Glassdoor scores of the (%) of employees who would recommend this company to a friend and (%) of employees who approve of the CEO, the following analysis was completed. 14 IoT companies on the list have very few (less than 20) or no Glassdoor reviews, so they are excluded from the rankings. In 2017 I did a factor analysis and found that companies who flood Glassdoor with fake reviews hit a wall around ten posts. With those findings in mind, an IoT company would need a minimum of 20 current employee interviews to be included in the final recommended list. Please find the full data set available for download here. The best IoT companies to work for are shown below and please click on the graphic to expand for easier reading: 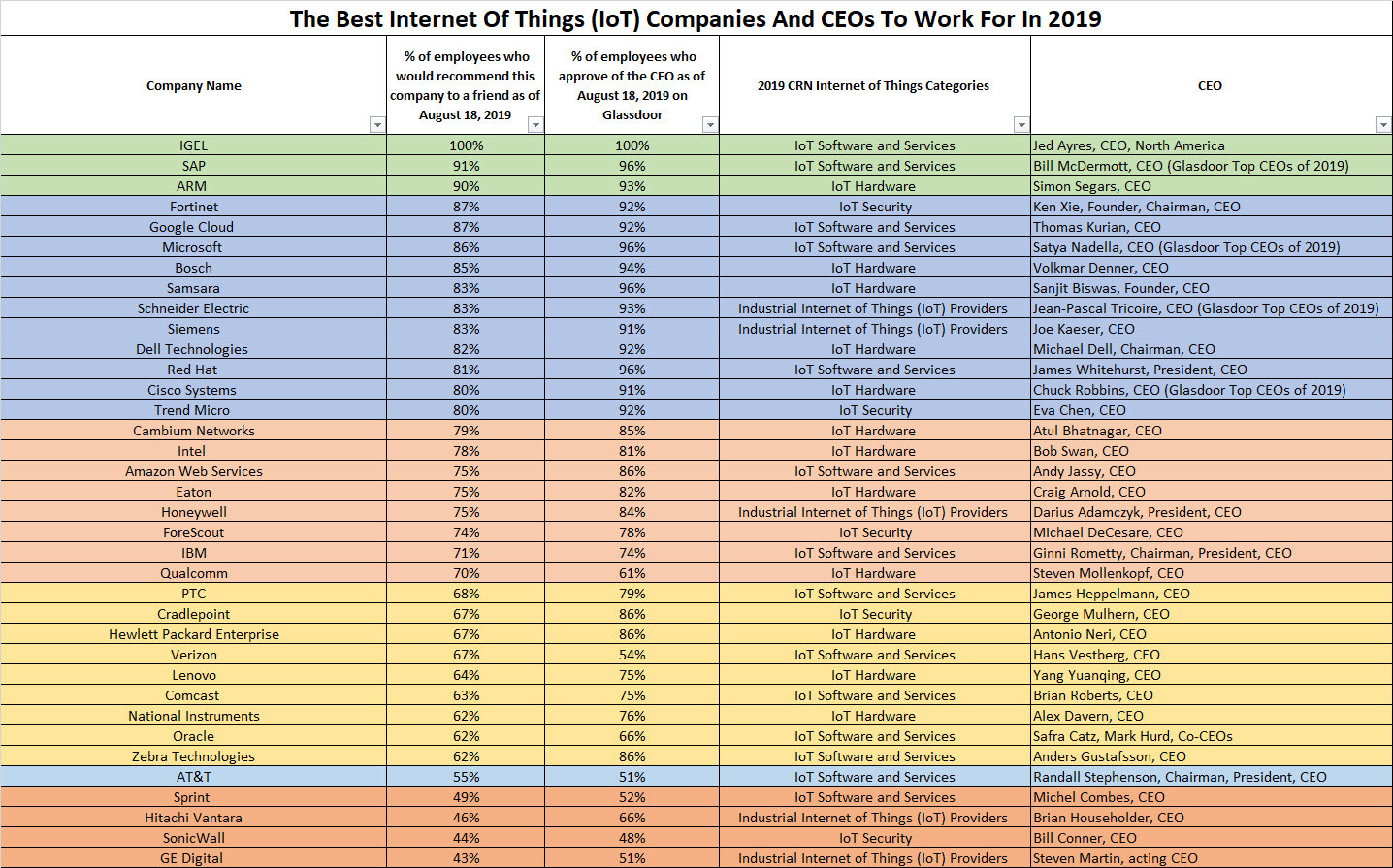 The highest-rated IoT CEOs on Glassdoor as of August 18, 2019, include the following:

I am currently serving as Director, Global Cloud Product Management at Ingram Cloud. Previous positions include product marketing at iBASEt, Plex Systems, senior analyst at AMR Research (now Gartner), marketing and business development at Cincom Systems, Ingram Micro, a SaaS start-up and at hardware companies. I am also a member of the Enterprise Irregulars. My background includes marketing, product management, sales and industry analyst roles in the enterprise software and IT industries. My academic background includes an MBA from Pepperdine University and completion of the Strategic Marketing Management Program at the Stanford University Graduate School of Business. I teach MBA courses in international business, global competitive strategies, international market research, and capstone courses in strategic planning and market research. I’ve taught at California State University, Fullerton: University of California, Irvine; Marymount University, and Webster University. You can reach me on Twitter at @LouisColumbus.

Security is Job 1: Machines vs. Machines

Digital is redefining cybercrime and cyberwarfare Cyberattacks today are multi-stage, hard to discover and highly targeted. Some security threats are

Could a robot or machine be doing your job? The robotic revolution is set to cause the biggest transformation in

Improving Endpoint Security Needs To Be A Top Goal In 2020