Blockchain SaaS As the prevalence of SaaS continues to grow, so too does the cloud. You know this because you

The dark side of IoT, AI and quantum computing: Hacking, data breaches and existential threat

Emerging technologies like the Internet of Things, artificial intelligence and quantum computing have the potential to transform human lives, but

Unfortunately, the management, creation and execution of policies haven’t changed much since the days of “time-and-motion studies”.  In many cases, policies are nothing more than a static list of what-if rules that govern what workers are to do in well-defined situations.  For example, [If your car has been driven over 3,000 miles since the last oil change, then change the oil] or [If you haven’t visited the dentist in greater than 6 months, then visit the dentist].

But what if…what if these policies weren’t just static if-then rules but were instead AI-based models that changed to optimize the actions based upon the constantly evolving state of the environment in which the business operates…without human intervention?

A “Policy” is a codified set of agent-based (human or machine) analytics that guide actions (or decisions) based upon current state (or environment) that optimize, automate and operationalize (scale) an organization’s business and operational models.

And my hypothesis is this: if a policy can be documented and automated, then it can be integrated with AI / ML to become autonomous so that the policies and procedures learn and adapt without human intervention. Policies that self-monitor, self-diagnose, self-learn and self-change/evolve?

If an autonomous device can gain information about the environment through interaction, learn through those interactions and update its operating model without human intervention, then why can’t the policies that support the operations of the business do the same thing?

The goal of Deep Reinforcement Learning is for an autonomous “agent” to learn a successful strategy from continuous engagement with the environment.  With the optimal strategy, the agent can actively adapt to the changing environment to maximize rewards (current and future) while minimizing costs (see Figure 1).

Figure 1: An agent interacts with its environment, trying to take actions to maximize cumulative rewards

For example, today we have a society policy or rule dictating what drivers are supposed to do when they arrive at an intersection at the same time. When two vehicles arrive at a 4-way stop at the same time, and they are located head-to-head and one of the vehicles intends to turn right and the other intends to turn left, the vehicle turning right has right of way. Move forward slowly before entering the intersection to indicate to other drivers you are making the turn. The driver turning left should wait until the other car has fully passed (see Figure 2). 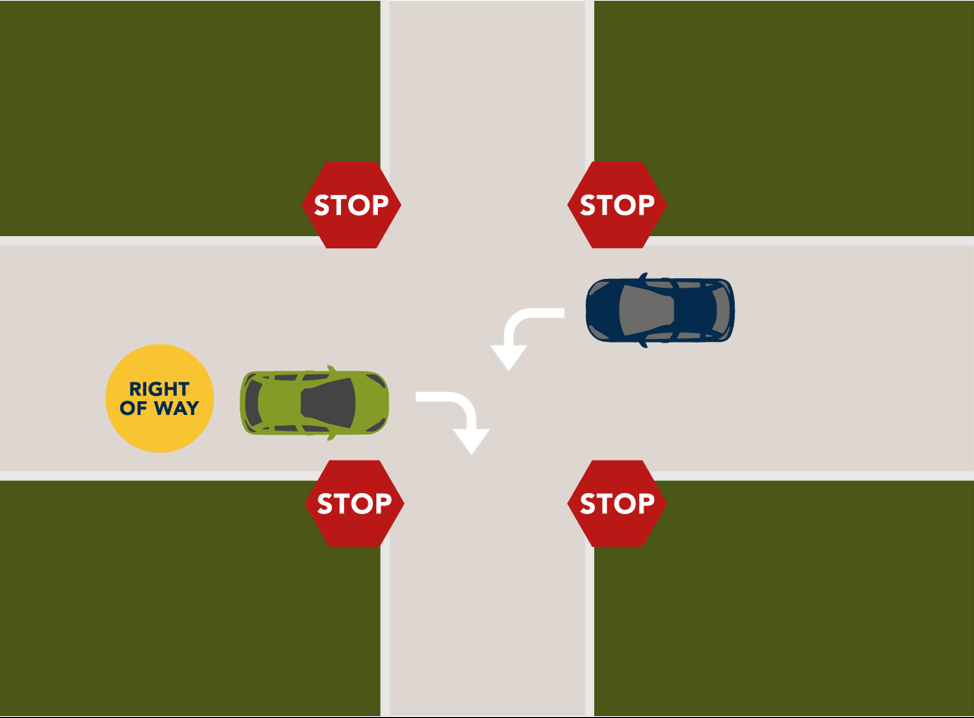 So instead of the old policy for determining to whom to defer when multiple cars arrive at the intersection at the same time, we’d have to develop a new policy that can continuously learn and evolve as the flow and density of traffic patterns changes throughout the day and in response to special events and situations.

The autonomous vehicle (agent) must constantly monitor, diagnose and learn in order to actively adapt to the changing environment to maximize future rewards while minimizing costs without human intervention.

If an autonomous device or vehicle can gain information about the environment through interaction, learn through those interactions and update its operating model without human intervention, then why can’t the policies that support the operations of the business do the same thing?  For example:

·       A Predictive Maintenance Policy that took into consideration for each part such factors as remaining useful life, demand forecasts, product performance anomaly detection, costs of that inventory, amount of that inventory, location of that inventory and the relative importance of that part to overall operations (for example in operating a hotel, one might accept a less accurate Predictive Maintenance policy for light bulbs which have minimal importance versus an air conditioning unit or an elevator for which downtime could have a substantial impact on profits and guest satisfaction) to make its prescriptive recommended actions.

·       A Customer Retention Policy that took into consideration for each customer such factors as purchase or engagement history, purchase or engagement anomaly detection, current lifetime value for that customer, [Predicted Customer Lifetime Value] (that took into consideration such factors as current life stage because if you are now an empty-nester, you are probably suddenly less valuable to a Theme Park operator) to make its prescriptive recommended actions.

Using Deep Reinforcement Learning, we can transition from static policies to autonomous policies that learn how to map any given situation (or state) to an action to reach a desired goal or objective without human intervention. These autonomous policies would dynamically learn and update in response to constantly changing environmental factors (such as changes in weather patterns, economic conditions, price of commodities, trade and deficit balances, global GDP growth, student debt levels, fashion trends, Cubs winning the World Series, etc.).

Do autonomous policies – policies that are constantly learning and updating based upon changing environmental factors – lead to an autonomous business?  Is this the modern math of the Autonomous Business?

That’s something to consider over a Guinness or three on my next trip to Ireland.

CTO, IoT and Analytics at Hitachi Vantara (aka “Dean of Big Data”)

Bill Schmarzo, author of “Big Data: Understanding How Data Powers Big Business” and “Big Data MBA: Driving Business Strategies with Data Science”. He’s written white papers, is an avid blogger and is a frequent speaker on the use of Big Data and data science to power an organization’s key business initiatives. He is a University of San Francisco School of Management (SOM) Executive Fellow where he teaches the “Big Data MBA” course. Bill also just completed a research paper on “Determining The Economic Value of Data”. Onalytica recently ranked Bill as #4 Big Data Influencer worldwide.

Cloud Desktops / Cloud-Based VDI Virtual Desktop Infrastructures (VDI) have been around for a while. As an example, VMware started

SOC Reporting Requirements You Need to Know in a Cloud Environment

SOC Reporting Requirements Security lapses in some of the world’s biggest companies continue to appear in news headlines, and information

Technology. Information. Disruption. The world is moving faster than ever before at unprecedented scale. Businesses today are operating in the