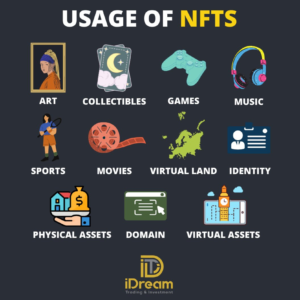 NFT stands for Non-Fungible Token. Anything fungible is replaceable with something that is of an equal value. A basic example would be money. A $10 note is fungible as it can easily be replaced with another $10 note, ten $1 notes, or any number of other notes and coins that add up to $10. Anything that cannot be so easily replaced is non-fungible. An NFT, therefore, is a digital token that cannot be replaced or replicated – it is the only one of its kind.

YouTuber Logan Paul was one of the first to popularize NFTs when he monetized a video stream where he unboxed Pokemon cards. Video clips of highlights from the stream were created, along with NFTs for each, and were sold off. Each NFT represented effective ownership of a specific video clip.

But this technology is not just for YouTubers selling video clips – that’s a very niche market and honestly, I do wonder who on earth was bidding for these video clips. There have already been examples of this technology being used to sell real-world items!

Earlier this month a studio apartment in Kyiv, Ukraine was sold at auction as an NFT. The auction was held on 9th June 2021 by Propy Inc., a real estate transaction platform. A 27 hour long bidding war ended in a winning bid of 36 ETH (approx $93,000 at time of sale). This transaction was the first of its kind and marked a step forward in the functionality of blockchains and NFTs.

The apartment was bought by Michael Arrington, the founder of TechCrunch, via smart contracts in 2017. He bought the apartment through a US based LLC and this LLC is currently the owner of the apartment on the Ukrainian land registry records. This allows the LLC and attached home ownership to be traded endlessly as an NFT. Devon Bernard, a tech entrepreneur from California and winner of the auction, said he has no plans to live in the apartment. Instead he wants to rent it out using blockchain technology and smart contracts. Each visitor will get an NFT and write a message in a smart contract guest book.

But this still seems a little gimmicky, so let’s look at how NFTs can be used in the art world and, more specifically, the digital art world.

Recently, InterPop hosted an event called “Block Party” for the launch of their new NFT comic series “Emergents’ The Nine”. The event was held in an online interactive world that really brought back the pre-pandemic conference feel. The online world hosted on Topia allowed guests to explore, view art, attend discussions and interact with other guests. The discussions centered around the opportunities that NFTs are providing to artists, the Emergents Universe and its accompanying trading card game (TCG).

Initially the each edition of the series will be free to read online with the option to purchase the edition as an NFT. Holders of the comic series’ NFTs will get to vote on and decide various aspects of the story and even characters outfits. This innovative idea presents a way to engage comic fans in a new and meaningful way.

InterPop are also releasing a trading card game based on the Emergents universe. The cards will be minted as NFTs allowing players to customise their deck by buying, trading and selling their cards using the Tezos blockchain. The TCG is planned to launch in early 2022, however some cards are available to purchase now on their new NFT marketplace ‘MinterPop’.

Just as people had houses in Runescape, there are digital worlds evolving, such as Decentraland, where people can buy property in a digital world, decorate it, and host people. As VR evolves and the graphics become higher and higher quality, NFTs will be used to buy and sell artwork in the digital realm for people to hang in their virtual homes. Imagine walking into someones house and seeing they have the first tweet from Jack Dorsey (or the last tweet from Alex Jones before he was banned). This is where we believe that the true value of NFTs lie, in digital artwork for digital worlds.