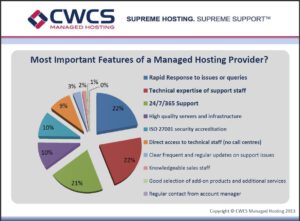 What Do IT Managers Place As Top Priority When Thinking Cloud? Service!

What Do IT Managers Place as Top Priority when thinking Cloud? Service!

IT managers have a great deal to think about when considering or overseeing their company’s transition to the cloud, since this is a technology that positions itself both as a data-storage security platform – which IT managers know a lot about – and  a dynamic business tool – which they may know slightly less about. So IT managers often appreciate receiving help from their industry counterparts, which is great news for those managed hosting providers who wish to distinguish themselves from being simply a pipeline or storage tank for their client’s data. Today’s cloud hosting provider can, and indeed must, ensure that they are visible as experts, mentors and consultants; constantly up-to-speed on market changes, trends, new technologies and case studies, and able to anticipate the fears and desires of their clients, while still, of course providing access to the nuts and bolts of cloud technology.

Knowing what IT managers (and their bosses) are both worried about and not worried about requires regular polling and investigation, which is what UK-based company CWCS Managed Hosting (www.cwcs.co.uk) did when it commissioned a study among Senior IT managers based in the UK, to see just where their priorities lay at this moment. Of the 104 people who responded, 44% represented companies of between 101 and 500 people, and 56% represented companies employing 500 or more people. 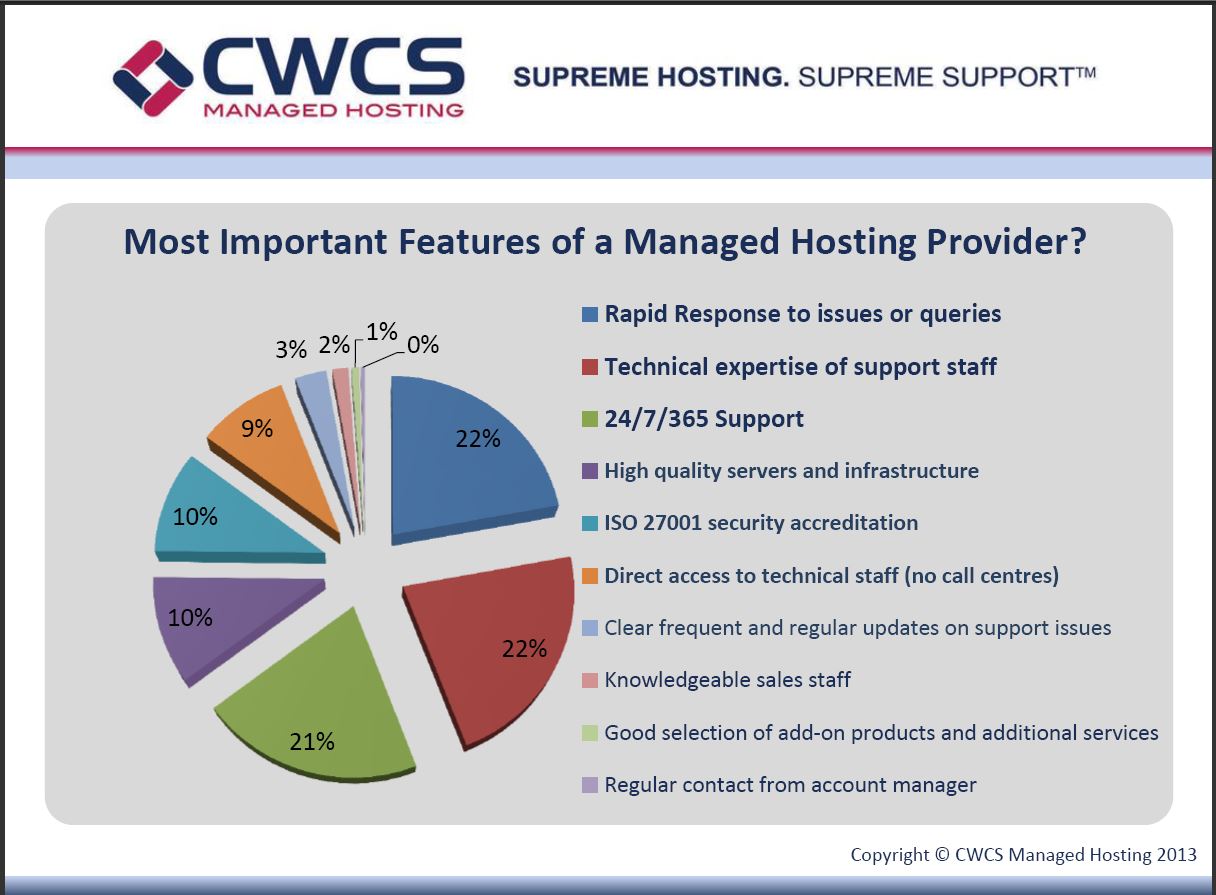 To the question: “What do you consider the most important aspect of a hosting solution?” the top answers were:

These numbers align with polling performed informally by CloudTweaks at the recent VMWorld Exposition in San Francisco, in which a majority of IT specialists and decision-makers pointed out that a  satisfactory level of accessibility and scalability now prevalent in the world’s major cloud systems has allowed companies to focus more on their strategic goals, by ensuring, for example, reliable and common access to data across numerous platforms, faster delivery of applications, and ease of use by employees especially in conjunction with the newly blossoming bring-your-own-device (BYOD) trend.

The CWCS Managed Hosting poll also revealed that IT managers, although becoming more technologically knowledgeable about the cloud, still have yet to access the power necessary to bring change to bear, with a full 60% of respondents stating their role was that of an “influencer” or “solution identifier” rather than an “authorizer”.

Perhaps most telling of all the questions asked, and most significant to managed hosting companies worldwide is the identification of “service” as the most important feature looked for in a managed hosting provider. Three related categories, “rapid response to issues or queries” (22%), “technical expertise of support staff” (22%), and “24/7/365 support” (21%) together comprised 65% of the collection of key priorities, with technological quality and security issues falling to jointly-held second place.

The findings of the CWCS Managed Hosting survey demonstrate that service – human contact and reliability – have the potential to make or break the fortunes of a managed hosting organization, especially when trust of both the technology and the perceived openness of the cloud have yet to solidify with the C-suite Executive level. As Peter Elgar explains, “as a managed hosting provider, we are seeing a steadily increasing shift towards cloud computing, particularly towards cloud servers and private clouds. But there is still some reluctance out there and although many businesses feel cloud is the way forward, there has to be a clear business case and the benefits need to be clearly defined.”

Those managed hosting providers who invest in top-notch customer service, and who actually view themselves as a service company first and technology company second, stand to gain the long-term trust and business of IT managers and the companies for who they work. This allows both parties to work towards building a cloud solution over time, rather than forcing a customer to live with an out-of-the box solution that never quite fits. As Elgar says, “many of our customers, often prompted by C-level executives, who have heard about the efficiency and cost savings cloud hosting can bring, will take a phased approach. They’ll start off with one or two servers in our public cloud and scale up over time.”