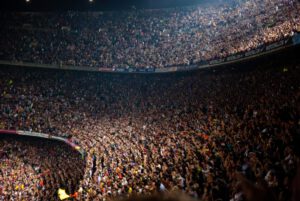 Sports teams are always looking to get ahead of the competition. Winning doesn’t come easy and many different decisions go into making sure you are successful applying sport data analytics. Decisions like what players to draft, who to trade, and style of coaching all can help a team win.

However, when Billy Beane of the Oakland A’s came along, things were about to change. In the mid-1990’s, Beane used sabermetrics to determine the value, making him the first to prioritize advanced statistical data in predicting player performance. The method worked and saved the team money as they had one of the smallest budgets in the league, but were one of the best teams. He is not the first to ever use analytics in sports, but he is the one who brought it to the mainstream.

Due to the success of Beane and the Oakland A’s, other teams in various different leagues took notice. As a result, almost every professional sports team has a department or individual in charge of analytics.

Hockey is one of the newest sports to get into the sports data analytics bandwagon. While bloggers and amateur statisticians have been using data analysis in hockey for a while, it is finally coming to the forefront. Teams are finally adopting these methods and even the NHL officially partnered with SAP SE in order to create and enhanced and more diverse stat package for their website.

There are different advanced stats that each league uses and the NHL focuses on three in particular. They are Corsi, Fenwick and PDO. Corsi looks at the sum of shots on goal (including misses and blocked shots). This is used to approximate a players puck possession. Fenwick is similar, but it doesn’t look at blocked shots and is viewed to have a stronger correlation to scoring chances. PDO is the sum of a team’s shooting percentage and its save percentage. This is basically a way to see how “lucky” a team is as most teams will regress to a sum of 100.

But despite the proven success of these stats and their widespread use in many sports, many players aren’t a fan of them. For instance, Drew Doughty (one of the best Corsi scores in the NHL) said that the method is “a bunch of crap”. Many players share his testaments as they are use to goals and assists measuring their success, not their shot percentage and even-strength shot differential.

But whether they like it or not, using advanced metrics and stats to judge players is likely here to stay. In fact, Florida Panthers let go of their head coach Gerard Gallant who often spoke openly against analytics usage (something which the Panthers want to use heavily going forward).

“The Panthers’ ownership and other team officials want the club to rely heavily on advanced statistics, and Gallant and Kelly were not the biggest fans of the analytics craze. They spoke openly about how their views differed from the perspective of Florida’s management on the analytics issue in August 2015, at a fundraising event hosted by the University of Prince Edward Island…”

Many different NHL teams have made personnel hiring decisions recently that show they are adapting to the changes in the sport. The Toronto Maple Leafs hired Kyle Dubas as their assistant GM, and numerous other teams have brought on bloggers and advanced stats pioneers like Sunny Mehta and Tyler Dellow. However, not everything is peaches and cream for these guys as the Canadiens let go of their analytics man (Matt Pfeffer) after he advised them to not trade P.K Subban to the Predators.

If you are interested in learning more about these advanced stats for players and teams, there are a number of different sites that you can visit. These sites will give you a deeper understanding about the value of a player or an inside look at how the teams are doing.