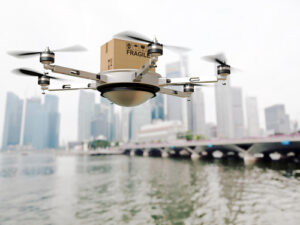 The Need For Planning In The Drone World

Do we need to plan the sky? Given the current state of drones that seems a bit far-fetched. But it may not be as far off as you think. The horizon in question, as far as time, in my opinion, is less than five years. Somewhere in 2021, or 2022 range. In that time-frame, we will see personal drones that move past the limits of the drones available today in 2017. The initial impact I suspect will be in the traditional weekend errand concept. Most of us spend the week making lists of the things we have to get done on the weekend. Many of those items are things we have to get in the car or jump on public transportation to get to. With the personal service drone, that will change. You will send your drone to get the things you need (errands).

Eventually, we will have drones that go to the store and pickup milk, eggs, and diapers during the week while we watch TV.  Some delivery drones will come from remote stores that we order from online; they send us our desired goods in 30 minutes, or it’s free (well that won’t work, but you get the idea). The concept of delivery will change. Front porches will no longer be for relaxing and rocking; they will become the binocular stations for people scanning the heavens for dinner, medication and other essentials. “I see the delivery drone.” The excited voice says but then the drone passes directly over the house and keeps going.

A future where we will fill up the horizon. By The Horizon I mean the sky. By the sky I mean airspace. Yes, there will remain areas that are cordoned off for airports. GPS marked boundaries where drones cannot fly. No fly zones so that airplanes are safe in the sky. We will also have to add additional safety systems for delivery drones, or there will be new issues.

“Sir, your drone carrying your order of flour and Hershey’s kisses collided with another drone on the way to your house. We are sending a new drone with your order, sorry for the inconvenience,” says the email. But you know the neighborhood children shot your delivery drone down with a BB Gun. First off they are all coated in flour, and their faces smeared with chocolate.

The reality of the sky above us is that it is changing. I know as a child reading science fiction I was certain the future would hold flying cars. It may still, but for now, the flying platforms will be drones and potentially passenger drones.

In the future it very well be that drones from various delivery services will occupy the space between 800 feet and 1000 feet with hobbyists flying 500 feet or less. Drone traffic control will require the implementation of two-way GPS chips on every drone (to allow for automated course correction). We will need to sell airspace at auctions just like we sold, and continue to sell airwaves. Companies will purchase 5 feet of airspace for their 3-foot delivery drones.

I can image the future Home Owners Association meetings, the chairman of the HOA calls the meeting to order. Any new business they ask? Two people stand up shouting “His drone flew over my house.” “His drone crashed into my flower bed and destroyed my flowers.” Eventually forcing the HOA to create No fly zones and places Drones aren’t allowed in the neighborhood as well.

The sky is definitely changing. It may be time for a little planning before it is too late.