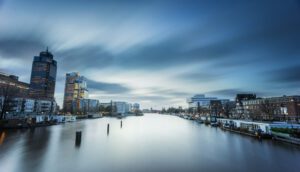 This Amsterdam Bank Wants To Hack … Itself?

Bank Wants To Hack … Itself?

With instances of professional hacking and data leaks making the news every year, it’s no secret that cybersecurity has become a major concern. How does a corporation ensure its cybersecurity remains impenetrable in a world of ever-advancing technology?

By hacking their own systems, of course.

The term’s known as penetration testing and it’s one of the more effective methods companies, financial groups and government agencies use to keep out unwanted digital penetration.

This technique of internal security testing has been used in the past, but it generally consisted of testing the physical security of a location.

In this day and age, with the tremendous value of digital data and currency, the threat of hacking has grown into a billion-dollar security issue. A perfect example of this would be the precautions set in place by the central bank of the Netherlands.

De Nederlandsche Bank, or DNB, has recently announced its intention to create a team of cybersecurity experts and hackers. Aimed at attacking the country’s financial infrastructure in order to test and improve its defenses, the attacks will be carried out in secret, targeting various banks, markets and clearinghouses.

The program will provide insight into the current state of cybersecurity the Netherlands possesses and also reveal whether or not an entire financial market can be built on a blockchain.

According to reports from within the DNB, the cyberprogram, also known as Tiber, will consists of a red team, a white team and a blue team.

The red team will be supervised by the DNB and tasked with hacking into the various financial institutions.

The white team will be alerted to the cyberattack and is responsible for observing the encounter.

The blue team will be responsible for discovering the cyberhack, tracking it and blocking the attempt on their system.

For the Netherlands, this project will not only help identify the weaknesses of the country’s infrastructure, but it will also help justify new methods of securing the internal operations of their financial market infrastructures.

While most financial institutions have their own security measures in place, the practice of self-hacking could serve as a proactive measure against hackers who do nothing but find and exploit security Vulnerabilities.

By the time a system has been hacked and compromised, it’s too late to do anything of real substance. Even if the hacks stopped and the infiltrator gets kicked out of the system, there’s no other option but to go through the entire system and search for residual threats.

Meanwhile, if the hack succeeds, then the entire system will be compromised — not only at that moment but also in the future. Any hacker that has taken a look at a system once will have identified several other entry points for further exploitation.

Discovering these vulnerabilities before a malicious hacker can use them not only protects the system, it also strengthens future security capabilities.

Thinking of the Future

As stated above, professional hackers spend their time thinking up ways to bypass cybersecurities and safeguards. It’s because of this consistent threat that system checks and tests must be performed on a regular basis.

In the case of the DCB, a single breach can and will threaten not only the financial security of the Netherlands, but also of the European System of Central Banks.

For online businesses and major corporations, especially ones with prolific brands such as Twitter or Amazon, the threat of a cyberattack remains constant nearly every day of the year.

It’s better to be proactive that to be caught unprepared.