The Origins of Virtual and Augmented Reality Infographic 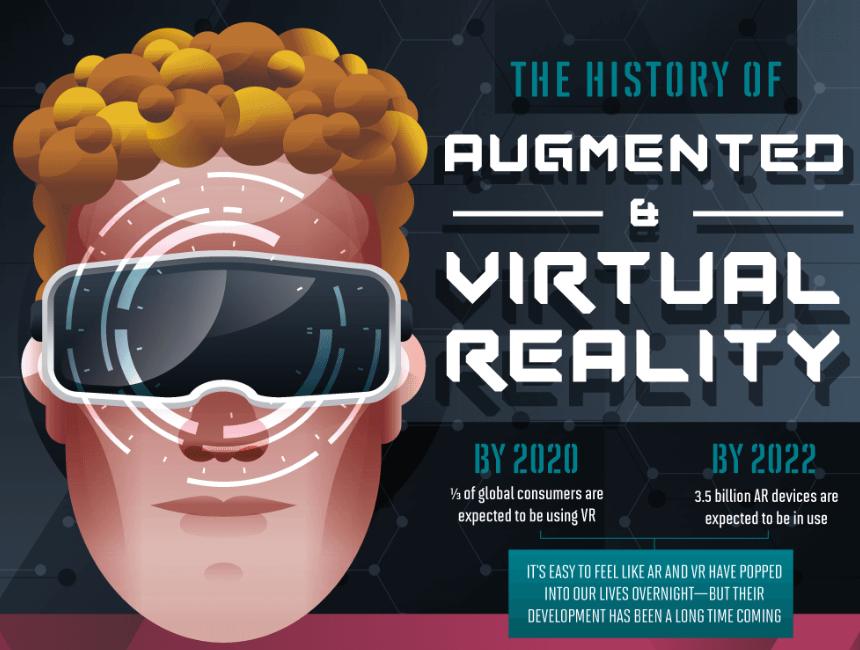 Origins of Virtual and Augmented Reality

The hype over virtual and augmented reality technologies is real, brought on by seemingly daily exponential developments. But though the excitement seems fresh and new, the ideas behind VR are as old as technology itself. Today, the Oculus Rift and HTC Vive are among the most popular VR headset devices, made possible only from a century’s worth of trial and error.

By 2020, one-third of global consumers are expected to be using VR; not surprising when we remember exactly how long this kind of technology has been in development. One of the first and simplest iterations of what we could call a VR device was invented in 1838 by English scientist Charles Wheatstone. Relying on optical illusions, this headset was remarkably similar to modern designs and allowed the user to view a virtual 3D image as a result of two different images visible only to each eye. Thomas Edison followed up 53 years later with his (1891) Kinetoscope which made use of electric light bulbs, pieces of film, and a lone peephole displaying images at an impressive 46 FPS.

Development of such devices continued well into the 20th century but it was only around the 1950s that the technology began catching up to the concepts. Eventually the goals for virtual reality began including full body experiences, and started including industries that weren’t necessarily focused on VR as an entertainment source. Flight simulators cropped up almost as soon as airplanes themselves were invented, intended to train new pilots in what to expect before even becoming airborne. Devices for use in the Army and Air Force were developed in an effort to train individuals, as well as to monitor dangerous situations, like the 1961 motion-tracking HMD Headsight developed by Philco Corporation engineers for the military.

AR and VR development have come a long way and its innovation shows no signs of slowing down now. Take a look at this infographic (Infographic source: HistoryDegree.net and Nowsourcing) for more on the history of VR tech, precursor devices to those we know and love today, and how inventions of the past will influence those of the future.