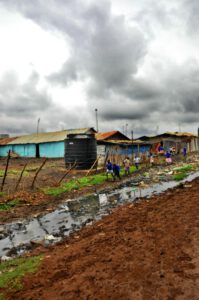 Hunger and famine are two of the leading indicators of serious poverty. In October 2013 the Global Hunger Index released its latest report, indicating nineteen countries suffer from levels of hunger that are either ‘alarming’ or ‘extremely alarming’, with one in eight people suffering from chronic undernourishment between 2010 and 2012.

Although farmers today produce three times as much food as they did fifty years ago, farmers still have to significantly improve their productivity to help feed a world population of 9 billion in 2050. Leaders of the G8 believe an important step towards solving the problem is to allow farmers, scientists, and entrepreneurs unrestricted access to agricultural big data.

Big data analysis can increase crop yields by helping farmers make better decisions about when to plant, manage and harvest their crops. Beyond broad data sets on topics such as rainfall levels, signs of pests and diseases, and anticipated prices at local markets, there is also the highly specialised and specific data sets such as plant genomics and local weather conditions.

The Climate Corporation operates a cloud-based farming information system that takes weather measurements from 2.5 million locations and combines it with 150 billion soil observations to generate 10 trillion weather simulation data points. This information allows farmers to know information as diverse as when is the best time to spray fields to getting an accurate estimate of the value of fields they may be considering buying.

The end goal is to help improve productivity in Africa, the worst performing agricultural producer. The CGIAR Consortium in France hopes to develop an app which uses all the available data to allow African farmers to identify their local soil type, the planting and harvesting requirements of each specific field, and then direct them to where they can locally purchase the seeds needed.

Using big data to aid the battle against hunger isn’t a new idea. The Famine Early Warning System has been in operation for 25 years to help international aid groups predict where famines in remote regions are about to occur and thus target the $1.5 billion of annual food aid from the U.S. Agency for International Development.

The system relies on a blend of social and scientific big data from federal agencies as diverse as NASA, the National Oceanic and Atmospheric Administration, and the Department of Agriculture to create hydrological models, food-economics forecasts, weather and climate simulations, and food-borne illness predictions. The output from these models is increasingly accurate and allows the world’s political leaders respond quickly and effectively in the early stages of a famine.

What is the future of big data in farming? Is it naïve to believe that data sets alone can solve the issue of world hunger, or are they the developed world’s best hope of fighting famine? Let us know in the comments below.