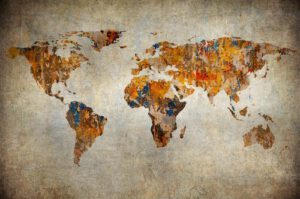 Although the world has in some ways become what Sci-Fi authors thought it would, some ideas, like self-driving cars, are rather far from becoming a reality. The problem? The earth is just too much, and too diverse information. To investigate this, we should look at the on-going attempts to map the physical world. As good a starting place as any is the company on a mission “to organize the world’s information and make it universally accessible and useful.” That’s Google of course.

Well, ‘attempts’ isn’t an apt description for all of the cases, as some can surely be labeled successes. Google Maps has been one of these. The service, which will celebrate its 10th birthday next year, has provided reliable maps to all but the remotest corners of the world, and one feature in particular stands out as the closest to mapping the actual streets on this planet.

That service is Google Street View, which takes you for a vicarious drive through a distant city, helps you scout a neighborhood before buying a house, helps you find parking without leaving the house, and so on. It’s pretty marvelous at that. But the fact is that they do rely on, first of all, people mapping the roads and people keeping the maps accurate; and afterwards, someone has to make them usable as well. I don’t know which company it was for–because they were rather secretive about it–but one of the first jobs I scored online was assessing the quality of computer-suggested driving routes, using Google Maps. I was by far not the only one.

But what’s the insurmountable problem, then? You probably know already. It’s mapping the world so it can be navigable physically from the information stored on a computer. Like, navigable with a self-driving car. Google’s–and anyone else’s in this business–problem is to make the world so well-documented that the representation can be trustable. In the case of cars, the solution that exists now is too labor-intensive (as is creating usable maps) and prone to failure. The self-driving car relies on meticulously documented streets–so much, in fact, that a new traffic light can catch the system completely off-guard.

Mapping is pretty straightforward when it comes to continents and countries, the shapes and borders of which change rather slowly. Street routes can be mapped as well, but they change faster and have to be monitored actively, unlike the prior two. What’s on the streets themselves–that is utterly unpredictable. The only long-term solution is either constant mapping or an algorithm that can respond and adapt to changing situations quickly. But artificial intelligence is still confined to science fiction, for better or worse.