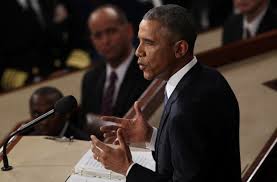 Hoping To Make The Internet A Safer Place

Make The Internet A Safer Place

Fresh off the back of a joint conference with British Prime Minister David Cameron last week, in which the two heads of state said they wanted their countries to have increased cybersecurity capabilities to help counter terrorism, Barrack Obama has used his annual State of the Union address to announce that he will use 2015 to pass new cybersecurity legislation that will make the internet a safer place.

“No foreign nation, no hacker, should be able to shut down our networks, steal our trade secrets, or invade the privacy of American families, especially our kids. We are making sure our Government integrates intelligence to combat cyber threats, just as we have done to combat terrorism”, said Obama.

The high-profile hacks of Sony, Target, and Home Depot in recent months have made new legislation a priority, though in the aftermath of the President’s announcement it was already being suggested his plans will struggle to gain traction. Anindya Ghose, Professor of Information, Operations and Management Sciences at New York University, said “I don’t think anyone wants to see another Sony. It’s bad for everyone, but I find it difficult to see any legislation going through despite the importance of it”.

It appears that, once again, the extremely partisan nature of US politics could stand in the way of progress. The Sony hack (in which 50,000 employees’ details were stolen) was the perfect example of how cybersecurity and personal data protection were linked, said Ghose, but because of the hostility between the two parties and the fact the Republicans control both Congress and the Senate, new legislation would be difficult.

This has infuriated groups such as the American Civil Liberties Union (ACLU) and the Electronic Frontier Foundation (EFF), who have repeatedly called on Obama to strengthen consumer protection; currently there are very few restrictions on the data that companies can collect from digital apps and how they are allowed to use that information.

Addressing the partisan politics directly, the President said “I urge this Congress to finally pass the legislation we need to better meet the evolving threat of cyber-attacks, combat identity theft, and protect our children’s information. If we don’t act, we’ll leave our nation and our economy vulnerable”.

David Le Duc, Director of a lobby group for the software and digital content industry, disagrees with Obama, the ACLU and the EFF. He said: “We agree with the goal of securing people’s privacy but we are concerned that a broad, overreaching approach will affect the ability to maximise the economic and social use of data”. His concerns could be legitimate – Silicon Valley has long espoused the virtues of big data for everything from advertising to improving our health, and there is a genuine concern on the ground that new laws could hinder firms’ ability to use the vast wealth of data currently at their disposal.

In his speech, Obama claimed that introducing new measures would let the US “continue to protect the technologies that have unleashed untold opportunities for people around the globe”. On this point Le Duc is more reconciliatory, saying “A lot of us enjoy tremendous benefits from apps that are customised and immediate based on our preferences and likes”, but he sounded a word of caution, adding “Going too far to limit that to protect our ‘privacy’ would not be an effective endeavour”.

What do you think of Obama’s ideas? Are they going too far, or a necessary step to protect citizens lives? Are Silicon Valley companies right to be concerned? Would Obama really jeopardise the future of some of the US’s foremost tech enterprises by limiting their ability to compete? Let us know in the comments below.