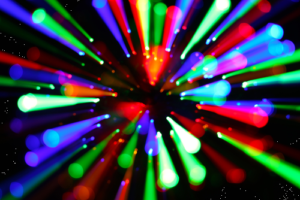 Last month I talked about the wearable IoT concept of the Internet of Bling. So what is more fashionable than an LED that blinks different colors based on the ambient temperature of the room? Blue when the wearer is cold. Red when the wearer is warm and so on. Or perhaps different LED’s blinking depending upon the type of message you’ve just received. For text messages, your LED blinks blue. For voicemails, it blinks red. Finally, it blinks yellow for emails. You could customize it, so no one knew the colors that may just that your bling was sparkling and effervescent.

Movie theaters would change from silence your cellular device to silence everything you are wearing. Yes even those brand new LED hair extensions that let the world know you’ve got mail. Or is the movie theater of the future less and auditorium and more a series of boxes. Boxes with one seat, two, three, four and even five seats with a screen and a door. No longer a large screen room but rather now your living room somewhere else. If your bling blinks no one else would care.

It is an interesting consideration as the IoT expands. Personally, I think that the biggest win for IoT sensor vendors is creating a management platform that can be quickly replaced. Low-cost sensors I can mount in my data center and have them watch and learn about the internal surroundings. Learning specific tolerances and ranges so that I am only notified when a range has been violated.

The simple act of pulling in outside air in the winter alone would be a value add for data centers. If you aren’t having to cool the air and you can take the moisture out of the air on the way in, you effectively don’t have to cool data centers in the winter (unless you are in Brazil or near the equator then you need to cool year round). Smart sensors will also be able to report on the noise coming from racks. What’s the quickest way to tell when disks are going bad? It is still audibly. The Internet of IT sensors presents many interesting potentials. You could as a CSP sell the sensor data to your customer’s in a package. Cheap easily replaced sensors are great ways to free the IT staff from doing boring, mundane tasks and let them focus on being proactive.

In the end, this builds nicely into the as a service world. What is a service today will be expanded. Sensors will provide a number of services we aren’t even considering as needs yet. For example, when running to the store you forget to check your refrigerator, the sensor can tell you everything that is in your refrigerator remotely. Some sensors in your home will be required 24/7 (CO, CO2, Fire and Security). While others, you may only require once a week. Utility priced sensors will allow you to pick and choose the data you receive and only pay for what you use.

All of this managed by a single device connected to the Internet of Bling. On that note, I have to go my LED is blinking purple, and I have to go look up what that means.