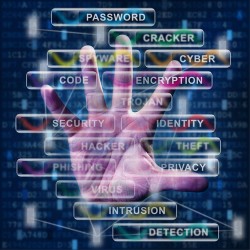 Let’s first look at the case of using file sharing applications such as Dropbox. If you are the only user of the files you store there, you can encrypt these files, or entire folders, with tools such as 7-zip or TrueCrypt before you move them to the cloud service.

However, it is likely that you want to share the files with somebody else. That means that these people should have the same encryption software and have access to the keys. So you have to figure out how to share the keys safely and protect them as you store them.

The hard thing about using encryption therefore is not so much the technology (although ‘under the hood’ encryption is really complicated), the hard thing is to understand what it protects against, and what the new risks are that encryption brings. Then you can start designing at which location where you encrypt, where you store your encrypted data, and how you are going to store and manage the encryption keys.

In the file sharing example, you encrypt to protect your data as it is ‘at rest’ at the cloud provider. You may trust the cloud provider, but you may want to prevent a search warrant forcing the provider to surrender your data. The encrypted data is stored at your own laptop or computer and at the file sharing service provider. The keys could be memorized or written down. Losing those keys is a new risk, by the way.

For a different example, let’s have a look at an enterprise customer relationship management system such as Salesforce. The data at rest includes a lot of customer data, which might bring in privacy concerns.

So in order to protect that, you might want to prevent that data going to the cloud unencrypted. There are a number of solutions in the market for that. One solution involves a separate cloud provider who filters all your CRM traffic and replaces customer data with encrypted customer data. When you then access that data, it will be decrypted by the same encryption provider. You still need to put some trust in the encryption provider, but they will no longer store your unencrypted data, so the risk of any loss of data at rest there is pretty small.

Now if you are a software developer, you might be using Infrastructure as a Service. That means your software runs on a virtual machine at a cloud provider. What kind of risks do you have there that encryption might be able to reduce?

To start with, your virtual machine has a virtual disk on which your data is stored. Of course, there is the risk that the staff of your cloud provider could access that. More realistically, that disk could be cloned by an insider and taken away for further inspection.

That risk can be addressed by encrypting the hard disk in the operating system, very much in the same way as you can encrypt the hard disk of your laptop. In most operating systems this is fairly easy. The biggest remaining issue is how to get the encryption key to the virtual machine as it boots up. That can be done, but it’s a little outside the scope of this article.

So far we have looked at data at rest. We should also look at data in motion. That’s a bit easier. An example of protecting data in motion is through using HTTPS for web traffic. Other cases of data in motion are file transfers such as with FTP and terminal traffic using Telnet. These are really old protocols that don’t encrypt anything, not even passwords. It is best to get rid of these as soon as possible and start using SFTP and SSH. You guessed it, the letter “S” in these protocol names stands for “Secure”.

Finally, we need to put things into perspective a bit.

All encryption in the cloud leaves the users’ computers unprotected. Did you know that 1 in 20 laptops go missing in their lifetime? And still most people don’t encrypt their hard disks!

Peter HJ van Eijk develops and delivers cloud computing training programs. He has delivered these programs dozens of times in the US, Europe, Middle-East and Asia to a wide variety of participants.

He has worked for Deloitte Consulting, IT supplier EDS, internet providers, and at the University of Twente, where he received his PhD in 1988. He is a board member of the Dutch Cloud Security Alliance Chapter.